When the Saints Go Marching In

When the Saints Go Marching In

"When the Saints Go Marching In", often referred to as "The Saints", is an American gospel hymn that has taken on certain aspects of folk music. The precise origins of the song are not known. Though it originated as a spiritual, today people are more likely to hear it played by a jazz band. The song is sometimes confused with a similarly titled composition "When the Saints are Marching In" from 1896 by Katharine Purvis (lyrics) and James Milton Black (music).[1] 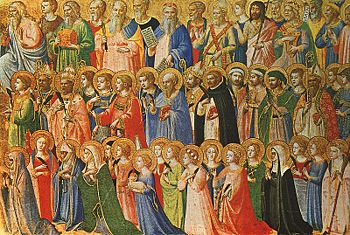 The Forerunners of Christ with Saints and Martyrs, a painting by Fra Angelico, 15th century

A traditional use of the song is as a funeral march. In the funeral music tradition of New Orleans, Louisiana, often called the "jazz funeral", while accompanying the coffin to the cemetery, a band would play the tune as a dirge. On the way back from the interment, it would switch to the familiar upbeat "hot" or "Dixieland" style. While the tune is still heard as a slow spiritual number on rare occasions, from the mid 20th century it has been more commonly performed as a "hot" number. The number remains particularly associated with the city of New Orleans, to the extent that it is associated with New Orleans' professional football team, the New Orleans Saints. Both vocal and instrumental renditions of the song abound. Louis Armstrong was one of the first to make the tune into a nationally known pop-tune in the 1930s. Armstrong wrote that his sister told him she thought the secular performance style of the traditional church tune was inappropriate and irreligious. Armstrong was in a New Orleans tradition of turning church numbers into brass band and dance numbers that went back at least to Buddy Bolden's band at the very start of the 20th century.

The tune was brought into the early rock and roll repertory by Fats Domino and (as "The Saint's Rock and Roll") by Bill Haley & His Comets.

A jazz standard, it has been recorded by a great many other jazz and pop artists.

It is nicknamed "The Monster" by some jazz musicians, as it seems to be the only tune some people know to request when seeing a Dixieland band, and some musicians dread being asked to play it several times a night. The musicians at Preservation Hall in New Orleans got so tired of playing it that the sign announcing the fee schedule ran $1 for standard requests, $2 for unusual requests, and $5 for "The Saints". (This was in early 1960s dollars. By 2004 the price had gone up to $10.)

This tune and often the words are often used as a popular theme or rallying song for a number of sports teams (see When The Saints Go Marching In in sport). It is the main anthem of Southampton F.C., St Kilda Football Club, St George Illawarra Dragons and the St Helens RLFC

The Rhodesian Light Infantry, also known as "The Saints", used it as their regimental march.

In the Southern gospel genre the song is often associated with Luther G. Presley,[2] who wrote the lyrics, and Virgil Oliver Stamps, who wrote the music, whose version copyrighted by the Stamps-Baxter Music Company popularized it as a gospel song.[3] A similar version was copyrighted by R.E. Winsett.[4]

As with many numbers with long traditional folk use, there is no one "official" version of the song or its lyrics. This extends so far as confusion as to its name, with it often being mistakenly called "When the Saints Come Marching In". As for the lyrics themselves, their very simplicity makes it easy to generate new verses. Since the first, second, and fourth lines of a verse are exactly the same, and the third standard throughout, the creation of one suitable line in iambic tetrameter generates an entire verse.

It is impossible to list every version of the song, but a common standard version runs:

We are trav'ling in the footsteps
Of those who've gone before,
And we'll all be reunited,
On a new and sunlit shore,

Some say this world of trouble,
Is the only one we need,
But I'm waiting for that morning,
When the new world is revealed.

Often the first two words of the common third verse line ("Lord, how") are sung as either "Oh, Lord" or even "Lord, Lord."

Arrangements vary considerably. The simplest is just an endless repetition of the chorus. Verses may be alternated with choruses, or put in the third of 4 repetitions to create an AABA form with the verse as the bridge.

I used to have a playmate
Who would walk and talk with me
But since she got religion
She has turned her back on me.

Some traditional arrangements often have ensemble rather than individual vocals. It is also common as an audience sing-along number. Versions using call and response are often heard, e.g.:

Analysis of the traditional lyrics

The song is apocalyptic, taking much of its imagery from the Book of Revelation, but excluding its more horrific depictions of the Last Judgment. The verses about the Sun and Moon refer to Solar and Lunar eclipses; the trumpet (of the Archangel Gabriel) is the way in which the Last Judgment is announced. As the hymn expresses the wish to go to Heaven, picturing the saints going in (through the Pearly Gates), it is entirely appropriate for funerals.

Artists who have performed and recorded the song

This is not a comprehensive list, but includes some notable versions.

This song is available in the Elvis Presley compilation "Peace in the Valley: The Complete Gospel Recordings." Sony BMG/Elvis Music [6]

As mentioned in the article on the song itself, in the 1930s, Louis Armstrong helped make The Saints into a jazz standard.

The tune was brought into the early rock and roll repertory by Fats Domino as one of the traditional New Orleans numbers he often played to rock audiences. Domino would usually use "The Saints" as his grand finale number, sometimes with his horn players leaving the stage to parade through the theater aisles or around the dance floor.

Judy Garland sang it in her own pop style.

Elvis Presley performed the song during the Million Dollar Quartet jam session and also recorded a version for his film, Frankie and Johnny.

Folk groups The Weavers (1956) and The Kingston Trio (1958) both recorded live versions of the song and used it as a closing number or encore.

Tears For Fears performed the song and on the Live from Santa Barbara CD.

Bruce Springsteen with The Seeger Sessions Band Tour includes the song as an encore for some shows.

Dolly Parton has also included the song in a gospel medley.

Actor Hal Linden performed the song with Dr. Teeth and the Electric Mayhem during his guest appearance on The Muppet Show.[7]

The Oi! band Condemned 84 did a version called "When The Boots Go Marching In."

Norwegian group, Timbersound's album "Solve et Coagula" also contains a version of the song, and includes a reference to the archangel Gabriel himself.

Louis Armstrong and Danny Kaye performed a comedy duet version in the 1959 film The Five Pennies, naming composers and musicians who would play "on the day that the saints go marching in".

Woody Guthrie sang a song called "When The Yanks Go Marching In" in 1943.

In 1983, Aaron Neville, along with New Orleans musicians Sal and Steve Monistere and Carlo Nuccio and a group of players for the New Orleans Saints American football team) recorded a popular version of the song incorporating the team's "Who Dat?" chant.[8]

Many supporters of Association Football teams sing versions of the song, "Saints" is often replaced with the name or nickname of the club. For example, the Stoke City Potters use "When the Reds Go Marching In" as a rally song during football matches.[9]

The rhythm of "When the Saints Go Marching In" was adapted by Dick Powell's Four Star Television for its legal drama, The Law and Mr. Jones starring James Whitmore, which ran on ABC from 1960-1962.[10]

It was recorded under the title of 'Revival' by Johnny and the Hurricanes. The band's management claimed authorship.[11]

A portion of the song was also used in the "boss" music of the "Out of This Dimension" Easter egg stage in the game Star Fox for the SNES.

A techno remix of this song, titled "Saints Go Marching," is a playable song in some versions of Dance Dance Revolution.

The song has been used as a fight song for many schools, including Providence College and Saint Joseph's University. The Baylor University Golden Wave Marching band plays the song during Baylor football games right after a touchdown is scored. The song is also the inspiration for the nickname of the New Orleans Saints.

The New Orleans-set computer game Gabriel Knight: Sins of the Fathers features a fast-paced rendition of the song.