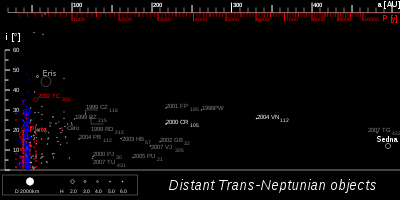 Trans-Neptunian objects beyond 100AU: SDO (in grey) and detached objects (in white)

Detached objects are a dynamical class of bodies in the outer Solar System beyond the orbit of Neptune. These objects have orbits whose points of closest approach to the Sun (perihelion) are sufficiently distant from the gravitational influence of Neptune that they are essentially unaffected by Neptune and the other planets: this makes them appear to be "detached" from the Solar System.[1][2]

In this way, they differ substantially from the majority of the known trans-Neptunian objects (TNOs), which form a loosely defined set of populations that have been perturbed to varying degrees onto their current orbit by gravitational encounters with the gas giants, predominantly Neptune. Detached objects have larger perihelia than these other TNO populations, including the objects in orbital resonance with Neptune, such as Pluto, the classical Kuiper belt objects in non-resonant orbits such as Makemake, and the scattered disk objects like Eris.

Detached objects have also been referred to in the scientific literature as extended scattered disc objects (E-SDO),[3] distant detached objects (DDO),[4] or scattered–extended, as in the formal classification by the Deep Ecliptic Survey.[5] This reflects the dynamical gradation that can exist between the orbital parameters of the scattered disk and the detached population.

At least nine such bodies have been securely identified,[6] of which the largest, most distant, and best known is Sedna.

Detached objects have perihelia much larger than Neptune's aphelion. They often have highly elliptical, very large orbits with semi-major axes of up to a few hundred astronomical units (AU, the radius of Earth's orbit). Such orbits cannot have been created by gravitational scattering by the gas giants (in particular, Neptune). Instead, a number of explanations have been put forward, including an encounter with a passing star[7] or a distant planet-sized object.[4] The classification suggested by the Deep Ecliptic Survey team introduces a formal distinction between scattered-near objects (which could be scattered by Neptune) and scattered-extended objects (e.g. 90377 Sedna) using a Tisserand's parameter value of 3.[5]

Detached objects are one of four distinct dynamical classes of TNO; the other three classes are classical Kuiper-belt objects, resonant objects and scattered-disc objects (SDO). Detached objects generally have a perihelion distance greater than 40 AU, deterring strong interactions with Neptune, which has an approximately circular orbit ca. 30AU from the Sun. However, there are no clear boundaries between the scattered and detached regions, since both can coexist as TNOs in an intermediate region with perihelion distance between 37 and 40 AU.[6] One such intermediate body with a well determined orbit is (120132) 2003 FY128.

The discovery of 90377 Sedna together with a few other objects such as 2000 CR105 and 2004 XR190 (also known as "Buffy") has motivated discussion of a category of distant objects that may also be inner Oort cloud objects or (more likely) transitional objects between the scattered disc and the inner Oort cloud.[2]

Although Sedna is officially considered a scattered-disc object by the MPC, its discoverer Michael E. Brown has suggested that because its perihelion distance of 76 AU is too distant to be affected by the gravitational attraction of the outer planets it should be considered an inner-Oort-cloud object rather than a member of the scattered disc.[8] This classification of Sedna as a detached object is accepted in recent publications.[9]

This line of thinking suggests that the lack of a significant gravitational interaction with the outer planets creates an extended–outer group starting somewhere between Sedna (perihelion 76AU) and more conventional SDOs like 1996 TL66 (perihelion 35AU), which is listed as a scattered–near object by the Deep Ecliptic Survey.[10]

One of the problems with defining this extended category is that weak resonances may exist and would be difficult to prove due to chaotic planetary perturbations and the current lack of accuracy in the orbits of these distant objects. These objects have orbital periods of more than 300 years and most have only been observed over a short observation arc of a couple years. Due to their great distance and slow movement against background stars, it may be decades before most of these distant orbits are determined well enough to confidently confirm or rule out a resonance. Further improvement in the orbit and potential resonance of these objects will help to understand the migration of the giant planets and the formation of the Solar System. For example simulations by Emel’yanenko and Kiseleva in 2007 show that many distant objects could be in resonance with Neptune. They show a 10% likelihood that 2000 CR105 is in a 20:1 resonance, a 38% likelihood that 2003 QK91 is in a 10:3 resonance, and a 84% likelihood that (82075) 2000 YW134 is in a 8:3 resonance.[11] The dwarf-planet candidate (145480) 2005 TB190 appears to have less than a 1% likelihood of being in a 4:1 resonance.[11]

This is a list of known objects by decreasing perihelion, that could not be easily scattered by Neptune's current orbit and therefore are likely to be detached objects: