There are various types of restaurant. Restaurants fall into several industry classifications based upon menu style, preparation methods and pricing. Additionally, how the food is served to the customer helps to determine the classification.

In British English, the term restaurant almost always means an eating establishment with table service, so the "sit-down" qualification is not usually necessary. Fast food and takeaway (take-out) outlets with counter service are not normally referred to as restaurants. Outside of North-America, the terms fast casual dining restaurants, family style, and casual dining are not used. Junk food establishments would also not often be referred to as a 'restaurant'.

Fast casual restaurants do not offer table service, but may offer non-disposable plates and cutlery. The quality of food and prices tend to be higher than those of a conventional fast food restaurant but may be lower than casual dining.

Family style restaurants are a type of casual dining restaurants where food is often served on platters and the diners serve themselves.[1] 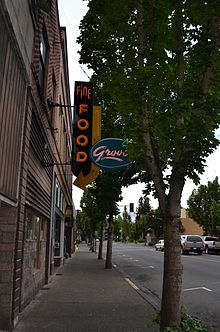 In France, a brasserie is a café doubling as a restaurant and serving single dishes and other meals in a relaxed setting. A bistro is a familiar name for a café serving moderately priced simple meals in an unpretentious setting, especially in Paris; bistros have become increasingly popular with tourists. When used in English, the term bistro usually indicates either a fast casual dining restaurant with a European-influenced menu or a cafés with a larger menu of food.

Buffets and smörgåsbord offer patrons a selection of food at a fixed price. Food is served on trays around bars, from which customers with plates serve themselves. The selection can be modest or very extensive, with the more elaborate menus divided into categories such as salad, soup, appetizers, hot entrées, cold entrées, and dessert and fruit. Often the range of cuisine can be eclectic, while other restaurants focus on a specific type, such as home-cooking, Chinese, Indian, or Swedish. The role of the waiter or waitress in this case is relegated to removal of finished plates, and sometimes the ordering and refill of drinks. 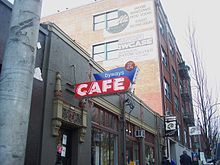 Cafés are informal restaurants offering a range of hot meals and made-to-order sandwiches. Coffee shops, while similar to cafés, are not restaurants due to the fact that they primarily serve and derive the majority of their revenue from hot drinks. Many cafés are open for breakfast and serve full hot breakfasts. In some areas cafés offer outdoor seating.

A cafeteria is a restaurant serving ready-cooked food arranged behind a food-serving counter. There is little or no table service. Typically, a patron takes a tray and pushes it along a track in front of the counter. Depending on the establishment, servings may be ordered from attendants, selected as ready-made portions already on plates, or self-serve their own portions. Cafeterias are common in hospitals, corporations and educational institutions.

In the UK, a cafeteria may also offer a large selection of hot food similar to the American fast casual restaurant, and the use of the term cafeteria is deprecated in favour of self-service restaurant.

Coffeehouses are casual restaurants without table service that emphasize coffee and other beverages; typically a limited selection of cold foods such as pastries and perhaps sandwiches are offered as well. Their distinguishing feature is that they allow patrons to relax and socialize on their premises for long periods of time without pressure to leave promptly after eating, and are thus frequently chosen as sites for meetings.

A destination restaurant is one that has a strong enough appeal to draw customers from beyond its community.[2]

Customers are seated as in a casual dining setting. Food items are prepared by the establishments for cooking on embedded gas stoves, induction cookers, or charcoal grills; the customer has control over the heating power of the appliance.

Despite the name, the Mongolian barbeque form of restaurant is not Mongolian, actually derived from Taiwan and inspired by Japanese teppanyaki[citation needed]. Customers create a bowl from an assortment of ingredients displayed in a buffet fashion. The bowl is then handed to the cook, who stir-fries the food on a large griddle and returns it on a plate or in a bowl to the consumer.

Mainly in the UK and other countries influenced by British culture, a pub (short for public house) is a bar that sometimes serves simple food fare. Traditionally, pubs were primarily drinking establishments with food in a secondary position, whereas many modern pubs rely on food as well, to the point where gastropubs are often essentially fine-dining establishments, known for their high-quality pub food and concomitantly high prices. A typical pub has a large selection of beers and ales on tap.

In North America, many restaurants specializing in Japanese cuisine offer the teppanyaki grill, which is more accurately based on a type of charcoal stove that is called shichirin in Japan. Diners, often in multiple, unrelated parties, sit around the grill while a chef prepares their food orders in front of them. Often the chef is trained in entertaining the guests with special techniques, including cracking a spinning egg in the air, forming a volcano out of differently-sized onion slices, and flipping grilled shrimp pieces into patrons' mouths, in addition to various props.