Although Red Dwarf creators have stated that there are no sentient alien lifeforms in the Red Dwarf universe[citation needed], there are a few life forms unique to the programme.

Felis sapiens are a sentient, humanoid species which evolved over 3 million years from a single pregnant domestic cat of Earth-origin, named Frankenstein, whom Dave Lister bought on shore leave on a colony on Titan. One cat, simply known as "The Cat," is a regular character in the show. Described by Binks of the Enlightenment as "bred from the domestic house cat and about half as smart"

GELF is an acronym for Genetically Engineered Life Form. There are many different GELFs in the show, the first shown was a polymorph in the episode of the same name, but others have become tribal and can act as traders throughout the universe.

The Despair Squid was a creature introduced in Back to Reality. The crew were investigating a crashed ship on an ocean moon, when they realised that there was little or no sealife in the ocean and that every creature in the ship had committed suicide. The squid had evolved a defense mechanism which would cause predators to have a hallucination, group or otherwise, which create sufficient despair, up to the point that the victim would commit suicide. In Back to Earth, a female squid is seen to cause a further hallucination, though this time one of elation rather than despair.

Androids in Red Dwarf are humanoid robotic servants, equipped with a personality and artificial intelligence. The most notable one is Kryten, a service mechanoid, with a neurotic personality. He has been shown to have the ability to break his programming, but has significant difficulty doing it.[2] He also has a guilt chip, which can be removed to allow him to do immoral actions.[3] Kryten has also been seen to watch the tv soap opera, Androids, where all characters are played by androids.[4]

Rogue Simulants are artificial life forms, broadly similar to mechanoids, although they are designed to look more human. They are described as "bio-mechanical killers created for a war that never took place." Some of them escaped the dismantling programme and so they prowl around deep space searching for a quarry worthy of their mettle.[5]

The first simulant featured in the show was in the episode Justice, where it was in stasis pending a trial and incarceration at the Justice Station. The pod it was held in thawed out and it attacked the crew, pursuing them into the Justice Zone, an area in the Justice Station where if you tried to commit a crime, the consequences happen to you. Failing to grasp this concept, it destroyed itself whilst trying to kill Lister. 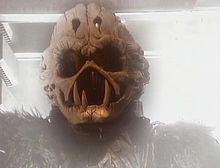 In The Inquisitor, a self-repairing simulant lasts till the end of time, and, having reached the conclusion that there is no God or afterlife, decides to judge the universe for leaders of worthwhile lives. Lister and Kryten destroyed it by making its gauntlet backfire, thereby undoing everything it ever did.

In the episode Gunmen of the Apocalypse, simulants fit out Starbug with laser cannons and armour so that they can have a proper battle. In the episode Rimmerworld, it is said that rogue simulants would capture human prisoners for the purposes of torture, and would stock their ships up with food supplies with which to keep their torture victims alive. Some of the simulants' victims had been kept alive in a state of perpetual agony for over four decades.

In Beyond a Joke, the Dwarfers encounter a simulant aboard the SS Centauri, whilst hunting for spare parts.

In the novel Backwards the simulants are renamed agonoids. They take control of Red Dwarf while the crew were trapped in a backwards universe, ripping out the machinery comprising Holly and transforming part of Red Dwarf into a 'Death Wheel' that would trap the crew in the centre when they returned and force the agonoids to race for the privilege of being 'The One' who would kill the last human. However, one agonoid killed every single other agonoid in order to ensure that he would be the one to kill Lister, but was then sucked into space when he attempted to attack the crew on Starbug.

In Infinity Welcomes Careful Drivers, it is explained that there was a fad for adding artificial intelligence to even the most mundane of electrical appliances, epitomised by the talkie toaster, whose reason to exist is to make toast. As such, when he isn't toasting, he can get quite impertinent. In the episode "Queeg" Lister mentions his friend Petersen buying smart shoes that wished to see the world and kept wandering off before destroying themselves by driving a car into a canal; a priest consoled Peterson, saying that shoes have "soles." Also, the skutters appear to have basic levels of intelligence and personality, and can be actively seen to dislike Rimmer. Rimmer envies them slightly, as they have a better union and more rights among the crew than he does.

Holograms in Red Dwarf are visual projections of dead people, with the person's personality, knowledge and experience, like living humans they have free will and can learn from experience. Holograms are apparently commonplace on 22nd century earth, for example, the newsreader on Channel 27 is a hologram. Holly is only capable of sustaining one hologram aboard the ship, and for the majority of the series, that hologram is Arnold Rimmer. However, in Confidence and Paranoia, Lister's Confidence reveals that, if all non-essential electrical equipment is switched off, then two holograms can be run at once. The technology is improved as the series progresses, with the introduction of a "light-bee", which the physical generator of the hologram remotely.[6] The light-bee is also upgraded in Legion to "hard light" allowing Rimmer a near-indestructible physical presence.

One notable group of holograms is those on the Holoship Enlightenment, who take the cream of Space Corps officers to travel the universe. As the entire ship is holographic, all the holograms on board effectively have a physical presence.[7]

The standard weapon used by the Red Dwarf crew is a Bazookoid. Although the books state that they are designed for mining, they have only been used as such in one instance: in "Psirens", Dave Lister uses one to free one of Starbug's landing stanchions that is embedded in rock. In "Polymorph", the bazookoids are shown to have a heat seeking ability. In "Stoke Me a Clipper", it is shown that the ammunition cartridge can be swapped for blanks.

Silicon Heaven is a concept of an afterlife for mechanoids and other items with artificial intelligence, to give their lives purpose. It is regularly justified to exist with the comment "where would all the calculators go?"

Smeg is a vulgarism or expletive used throughout the series of Red Dwarf. Although no specific meaning is ever given, it and its derivatives are regularly used as a derogatory term. There has been some speculation that the name is related to the word smegma; however, this has been denied by the writers.[citation needed] *Most entries on Urban Dictionary list this folk etymology.

It has nothing to do with the Italian manufacturer of fridges, cookers etc. (Smeg)

The Space Corps Directives are a running gag in the series, as a list of regulations that Space Corps members should follow. As there are so many of them, Rimmer regularly chooses the incorrect number, resulting in an irrelevant joke by Kryten.

Some science fiction concepts are shared by a few different media, however Red Dwarf has a specific take on them.

The society of which Red Dwarf is a part is bilingual, the two languages being English and the international language Esperanto. Signs in the ship are in both languages. Esperanto as sole language, or as a more-or-less universal auxiliary language is a common theme in science fiction, from the works of Harry Harrison to the more recent Yiddish Policemen's Union.

The episode "Kryten" establishes that Lister, Holly, and Kryten all speak at least some Esperanto. Rimmer doesn't seem to have mastered the language yet, although it seems to be vital to advancement in the Space Corps; he's shown trying to learn it from a videotape without much success. The name "Esperanto" means "one who hopes", a fact that is alluded to in "Back to Reality" (possibly as a clue to the viewer).

There are many parallel universes in Red Dwarf, mostly based on the alternative decision concept. For example, there is one universe where Lister died and Kristine Kochanski survived,[8] and another where Rimmer is "Ace".[9] However, there are also some completely alternate realities, like one where everyone is the opposite sex, males give birth, and Cat is a dog.[10]

Stasis in Red Dwarf is that of complete suspended animation. It is explained as a static field of time, which time cannot penetrate, just as X-Rays cannot penetrate lead. When Lister steps into the Stasis booth and it is activated, it pauses on him waving goodbye.