Design and manufacturing of gears

Design and manufacturing of gears

Gear design is the process of designing a gear. Designing is done prior to manufacturing and includes calculation of the gear geometry, taking into account gear strength, wear characteristic of the gear teeth, material selection, gear alignment and provision for lubrication of gear.

A gear is a rotating machine part which has cut teeth, that mesh with another toothed part in order to transmit torque. The cut teeth are also called 'cogs'. Gears are one of the most important parts of any machine or a mechanism. Some of the sectors in which gears play a vital role are: 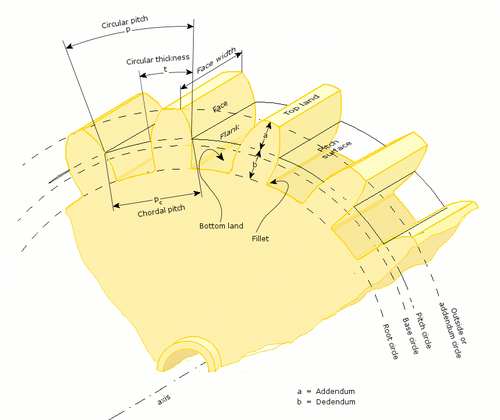 The gear material should have the following properties:

Generally cast iron,steel,brass and bronze are preferred for manufacturing metallic gears with cut teeth.Where smooth action is not important,cast iron gears with cut teeth may be employed.Commercially cut gears have a pitch line velocity of about 5 metre/second.For velocities larger than this,gear sets with non metallic pinions as one member are used to eliminate vibration and noise.Non-metallic materials are made of various materials such as treated cotton pressed and and moulded at high pressure,synthetic resins of the phenol type and raw hide.Moisture affects raw hide pinions.gears made of phenolic resins are self supporting on the other hand other two types are supported by metal side plates at both ends of the plate.Large wheels are made with fretting rings to save alloy steels.Wheel centre is commonly cast from cast iron.The ring is forged or roll expanded from steel of the respective grade specified by the tooth design.

A gear has three important parts

Hub of gears are of two types,solid or split.The advantage of split hub is that it reduces the cooling stresses in the gear and facilitates the mounting of the gear on the shaft.The solid hub gear is to be mounted overhung on the shaft.The key is placed under the arm in case of solid hub while in case of split hub,the key is placed at right angles to the hub joint. Small gears up to 250 mm pitch circle diameter are built with a web,which joins the hub and the rim.The thickness of the web of the gear should be such that it is capable of transmitting the torque without shearing off at the hub where it joins.The gear is designed such that the thickness of its web is equal to half the circular pitch.Gear of larger diameter are provided with arms.The number of arms depends on the pitch circle diameter of the gear.Following are the prevailing practices of the number of arms and gear diameters 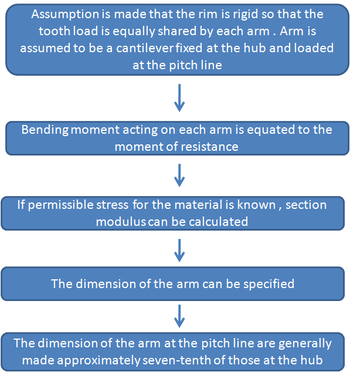 Empirical formulas are used to determine the rim thickness.

where N is the number of teeth and NA are the number of arms.
A good design is a one in which the rim has a central rib of thickness equal to half the circular pitch.
If the lay out of the shaft is known,the diameter of the gear shaft can be calculated.Toothed wheels fixed on the shaft are fitted by interference-for example,press or light press fit.For impact load or speeds above 2000 r.p.m. press fit is employed.If the wheel is to be removed from the shaft medium fit are used.

The following types of gears are most commonly used in industry for power transmission purposes:

A gear having straight teeth along the axis is called a spur gear.They are used to transmit power between two parallel shafts as shown in the adjacent figure.A rack is a straight tooth gear which can be thought of as a segment of spur gear of infinite diameter.

The prime requirement of a gear drive is to transmit power at a particular velocity ratio for certain working condition,such as,operating time,nature of load,etc.The following points must be considered while designing a gear drive:

Besides the above basic requirements,the following aspects are also considered:

In a gear drive,power is transmitted by means of a force exerted by the tooth of the driving gear on the mating tooth of the driven gear.The law of gearing states that,the exerted force Fn is always normal to the tooth surface and acts along the pressure angle line.

The normal force Fn as shown in the above figure,acting along the pressure line,can be resolved into two components,tangential force Ft and radial force Fr.Thus,

Ft is responsible for transmitting torque and hence the power while the Fr is called the separating force,which always acts towards the centre of the gear.
In the force analysis of a gear drive,an assumption is made that the tangential force remains constant in magnitude as the contact between two teeth moves from top of the tooth to its bottom.The torque transmitted by Ft with respect to the centre of the gear is

Also by using the relation P = Ft×v, the tangential force responsible for transmitting power can be obtained,where

P, is the power(kW)
v, is the pitch line velocity(m/s)
Ft, is tangential force(kN). 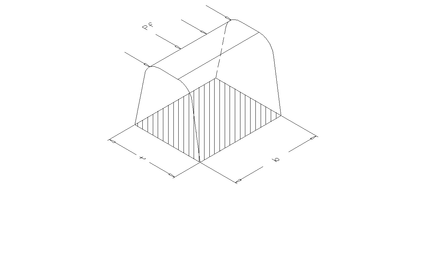 Force acting on a gear tooth

The continuous change in the point of application of load on the tooth profile and the change in magnitude and direction of the applied load make accurate stress analysis of a gear tooth a complicated problem.In 1892,Wilfred Lewis published a paper titled,"The investigation of the strength of gear tooth",in which he derived an equation for determining the approximate stress in a gear tooth by treating it as a cantilever beam of uniform strength.
The following assumptions are made for the beam strength calculation: