The Germantown White House (formerly the Deshler-Morris House[2], Deshler House or Perot-Morris House) is a historic mansion in the Germantown section of Philadelphia, Pennsylvania. It was the scene of fighting in the Battle of Germantown, and it is the oldest surviving presidential residence, having twice sheltered George Washington during his term of office.

The house takes its former name from its first and last owners: David Deshler, who built it beginning in 1752; and Elliston P. Morris, who donated it to the National Park Service in 1948. 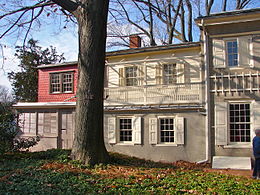 The rear of the house shows the earliest construction.

Deshler, a merchant, bought a 2-acre (8,100 m2) lot from George and Anna Bringhurst in 1751-52, and constructed a four-room summer cottage. Twenty years later he built a 3-story, 9-room addition to the front, creating one of the most elegant homes in the region.

Isaac Franks, a former colonel in the Continental Army, bought the house following Deshler's 1792 death. It was he who rented it to President Washington.

Later, the house was sold to Elliston and John Perot, and in 1834 to Elliston's son-in-law, Samuel B. Morris. The Morris family lived in the house for over a hundred years, before its 1948 dontation to the National Park Service.

On October 4, 1777, it was a scene of fighting in the Battle of Germantown, after which British General Sir William Howe occupied the house.

When the Yellow Fever Epidemic of 1793 struck Philadelphia, President Washington remained in the city until September, before making his regular autumn trip home to Mount Vernon. He and a small group of servants returned in early November, but Philadelphia was under quarantine and they were rerouted to Germantown, then ten miles (16 km) outside the city.[3]

He first occupied the Dove House, the headmaster's residence for Germantown Academy (now extensively altered and part of Pennsylvania School for the Deaf). He also traveled to Reading, Pennsylvania, 60 miles (96 km) northwest of the city, to see if it would make a suitable emergency capital.

Returning to Germantown, from November 16 to 30, he occupied the Isaac Franks house. His wife Martha, two of her grandchildren, Eleanor Parke Custis and George Washington Parke Custis, and more of their servants and staff joined him late in the stay.

The following September and October, Washington and his family returned to the Franks house for vacation, although he left early to deal with the Whiskey Rebellion in Western Pennsylvania. He met there four times with his cabinet: Secretary of State Thomas Jefferson, Secretary of Treasury Alexander Hamilton, Attorney General Edmund Randolph, and Secretary of War Henry Knox. The President posed for painter Gilbert Stuart, who kept a studio nearby, and the family attended the German Reformed Church across the square.

Four enslaved servants were held by the Washingtons at the Franks house: Oney Judge, Austin (her brother), Moll, and Hercules. 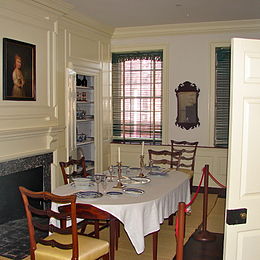 The house is administered by Independence National Historical Park and operated by the Volunteers of the Deshler-Morris House Committee, Inc. The house was listed on the National Register of Historic Places in 1972 and it is a contributing property of the Colonial Germantown Historic District.

In 2009, the National Park Service changed the official name from the "Deshler-Morris House" to the "Germantown White House."

The Bringhurst House, neighboring the Germantown White House on the northwest, was originally owned by John Bringhurst (February 19, 1725 – March 18, 1795), a carriage builder and inventor of the "Germantown Wagon"; in 1780 he built a carriage for George Washington. His estate consisted of 19 acres (77,000 m2) in Germantown, and was eventually split up by his heirs. Today, near the current historic site, "Bringhurst Street" is a street named after him which lies on the edge of his former land.[4]

Lieutenant Colonel John Bird was "lying sick" in the Bringhurst House when the American army attacked on the morning of October 4, 1777. Bird arose from bed to lead his men, but was mortally wounded in the battle. Although a surgeon tried to treat him in Melchoir Meng's house situated on what is now a part of Vernon Park, he was carried back to the Bringhurst House, where he died.[4]

In 1973, the Bringhurst house was donated to the National Park Service from the Germantown Savings Bank in order to "assure access, light, and air for the historic structure". The Bringhurst property is currently in the process of conversion into an exhibition space and welcome center for the Germantown White House landscape.[5]