Descendants of James II of England

Descendants of James II of England 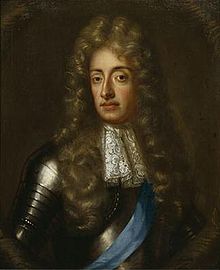 James was married twice; his first wife was Anne Hyde, the daughter of the first Earl of Clarendon. After her death, he married Mary of Modena. Many of his legitimate children from both marriages died in infancy, but four survived. Two of James's mistresses also bore him illegitimate children; these are the only lines of his descendants that are known for certain to exist to this day. This article deals with the most senior figures who were descended from James' children.

James's genealogy is of interest in part because a political movement, Jacobitism, arose from the claim his legitimate descendants were considered by some to have to the thrones of England, Ireland, and Scotland (and, later on, the United Kingdom). Also, several of James's descendants with his mistresses have been notable in the history of Great Britain and Ireland, some specifically because they were James's descendants.

by Mary of Modena

The question of James, Prince of Wales's legitimate descendants is a controversial issue due to its connection to Jacobitism, the 1689 Bill of Rights, and the 1701 Act of Settlement. Their exclusion from the line of succession was seen by some as biased and unfair, while others felt it was necessary in order to protect the supremacy of the Church of England.

It was presumed by scholarly historians such as James Lees-Milne in The Last Stuarts (published 1983) that the Duchess of Albany's two daughters died childless. However, in 2002 writer Peter Pininski released a book entitled The Stuarts' Last Secret, presenting evidence that Marie-Victoire married Polish nobleman the Chevalier de Nikorowicz in 1779 and had a son named Antime. Antime's daughter Julie, married Count Leonard Pininski, who was the author Peter Pininski's Great Grandfather, thus making him one of the surviving descendants of Charles Edward Stuart.

See also: House of FitzJames and Duke of Berwick

See also: Duke of Buckingham and Normanby, Baron Mulgrave, and Marquess of Normanby

Descent to the Mitford Sisters