This depiction of the Hadley cell shows the process which sustains low-pressure areas. Diverging winds aloft allow for lower pressure and convergence at the Earth's surface, which leads to upward motion.

A low-pressure area, or "low", is a region where the atmospheric pressure at sea level is below that of surrounding locations. Low-pressure systems form under areas of wind divergence which occur in upper levels of the troposphere. The formation process of a low-pressure area is known as cyclogenesis. Within the field of atmospheric dynamics, areas of wind divergence aloft occur in two areas. The first area is on the east side of upper troughs which form half of a Rossby wave within the Westerlies (a trough with large wavelength which extends through the troposphere). A second area of wind divergence aloft occurs ahead of embedded shortwave troughs which are of smaller wavelength. Diverging winds aloft ahead of these troughs cause atmospheric lift within the troposphere below, which lowers surface pressures as upward motion partially counteracts the force of gravity.

Thermal lows form due to localized heating caused by greater sunshine over deserts and other land masses. Since localized areas of warm air are less dense than their surroundings, this warmer air rises which lowers atmospheric pressure near that portion of the Earth's surface. Large-scale thermal lows over continents help drive monsoon circulations. Low-pressure areas can also form due to organized thunderstorm activity over warm water. When this occurs over the tropics in concert with the Intertropical Convergence Zone, it is known as a monsoon trough. Monsoon troughs reach their northerly extent in August and their southerly extent in February. When a convective low acquires a well-defined circulation in the tropics it is termed a tropical cyclone. Tropical cyclones can form during any month of the year globally, but can occur in either the northern and southern hemisphere during November.

Atmospheric lift will also generally produce cloud cover through adiabatic cooling once the air becomes saturated as it rises, although the low-pressure area typically bring cloudy skies, which act to minimize diurnal temperature extremes. Since clouds reflect sunlight, incoming shortwave solar radiation is less which causes lower temperatures during the day. At night, the absorptive effect of clouds on outgoing longwave radiation, such as heat energy from the surface, allows for warmer diurnal low temperatures in all seasons. The stronger the area of low pressure, the stronger the winds which are experienced in its vicinity. Globally, low-pressure systems are most frequently located over the Tibetan Plateau and in the lee of the Rocky mountains. In Europe (particularly in the United Kingdom), recurring low-pressure weather systems are typically known as depressions.

Cyclogenesis is the development strengthening of cyclonic circulations, or low-pressure areas, within the atmosphere.[1] Cyclogenesis is the opposite of cyclolysis, and has an anticyclonic (high pressure system) equivalent which deals with the formation of high pressure areas—Anticyclogenesis.[2] Cyclogenesis is an umbrella term for several different processes, all of which result in the development of some sort of cyclone. The term cyclone is used where circular pressure systems flow in the direction of the Earth's rotation,[3][4] which normally coincides with areas of low pressure.[5][6] The largest low-pressure systems are cold-core polar cyclones and extratropical cyclones which lie on the synoptic scale. Warm-core cyclones such as tropical cyclones, mesocyclones, and polar lows lie within the smaller mesoscale. Subtropical cyclones are of intermediate size.[7][8] Cyclogenesis can occur at various scales, from the microscale to the synoptic scale. Larger scale troughs, which are also called Rossby waves, are synoptic in scale.[9] Shortwave troughs embedded within the flow around larger scale troughs are smaller in scale, or mesoscale in nature.[10] Both Rossby waves and shortwaves embedded within the flow around Rossby waves migrate equatorward of the polar cyclones located in both the Northern and Southern hemispheres.[11] All share one important aspect, that of upward vertical motion within the troposphere. Such upward motions decrease the mass of local atmospheric columns of air, which lower surface pressure.[12]

Extratropical cyclones form as waves along weather fronts due to a passing by shortwave aloft or upper level jet streak before occluding later in their life cycle as cold core cyclones.[13][14][15] [16] Polar lows are small-scale, short-lived atmospheric low-pressure systems that are found over the ocean areas poleward of the main polar front in both the Northern and Southern Hemispheres. They are part of the larger class of mesoscale weather systems. Polar lows can be difficult to detect using conventional weather reports and are a hazard to high-latitude operations, such as shipping and gas and oil platforms. They are vigorous systems that have near-surface winds of at least 17 metres per second (38 mph).[17]

Tropical cyclones form due to latent heat driven by significant thunderstorm activity, and are warm core with well-defined circulations.[18] Certain criteria need to be met for their formation. In most situations, water temperatures of at least 26.5 °C (79.7 °F) are needed down to a depth of at least 50 m (160 ft);[19] waters of this temperature cause the overlying atmosphere to be unstable enough to sustain convection and thunderstorms.[20] Another factor is rapid cooling with height, which allows the release of the heat of condensation that powers a tropical cyclone.[19] High humidity is needed, especially in the lower-to-mid troposphere; when there is a great deal of moisture in the atmosphere, conditions are more favorable for disturbances to develop.[19] Low amounts of wind shear are needed, as high shear is disruptive to the storm's circulation.[19] Lastly, a formative tropical cyclone needs a pre-existing system of disturbed weather, although without a circulation no cyclonic development will take place.[19] Mesocyclones form as warm core cyclones over land, and can lead to tornado formation.[21] Waterspouts can also form from mesocyclones, but more often develop from environments of high instability and low vertical wind shear.[22]

Vertical cross-section of a thermal low

In deserts, lack of ground and plant moisture that would normally provide evaporative cooling can lead to intense, rapid solar heating of the lower layers of air. The hot air is less dense than surrounding cooler air. This, combined with the rising of the hot air, results in a low-pressure area called a thermal low.[23] Monsoon circulations are caused by thermal lows which form over large areas of land and their strength is driven by how land heats quicker than the surrounding nearby ocean. This creates a steady wind blowing toward the land, bringing the moist near-surface air over the oceans with it.[24] Similar rainfall is caused by the moist ocean air being lifted upwards by mountains,[25] surface heating,[26] convergence at the surface,[27] divergence aloft, or from storm-produced outflows at the surface.[28] However the lifting occurs, the air cools due expansion in lower pressure, which in turn produces condensation. In winter, the land cools off quickly, but the ocean keeps the heat longer due to its higher specific heat. The hot air over the ocean rises, creating a low-pressure area and a breeze from land to ocean while a large area of drying high pressure is formed over the land, increased by wintertime cooling.[24] Monsoons are similar to sea and land breezes, a term usually referring to the localized, diurnal (daily) cycle of circulation near coastlines everywhere, but they are much larger in scale, stronger and seasonal.[29] 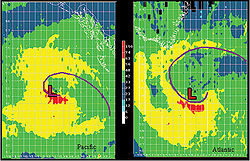 Large polar cyclones help determine the steering of systems moving through the mid-latitudes, south of the Arctic and north of the Antarctic. An index which is used to gage the magnitude of this effect in the Northern Hemisphere is the Arctic oscillation.[30] Extratropical cyclones tend to form east of climatological trough positions aloft near the east coast of continents, or west side of oceans.[31] A study of extratropical cyclones in the Southern Hemisphere shows that between the 30th and 70th parallels, there are an average of 37 cyclones in existence during any 6-hour period.[32] A separate study in the Northern Hemisphere suggests that approximately 234 significant extratropical cyclones form each winter.[33] In Europe, particularly the United Kingdom, recurring extratropical low-pressure weather systems are typically known as depressions.[34] These tend to bring wet weather throughout the year. Thermal lows also occur over continental areas across the subtropics during the summer such as the Sonoran Desert, the Mexican plateau, Sahara, South America, and Southeast Asia.[23] The lows are most commonly located over the Tibetan plateau and in the lee of the Rocky mountains.[31]

February position of the ITCZ and monsoon trough in the Pacific Ocean, depicted by area of convergent streamlines offshore Australia and in the equatorial eastern Pacific
See also: Monsoon trough

Elongated areas of low pressure form at the monsoon trough or Intertropical convergence zone as part of the Hadley cell circulation.[35] Monsoon troughing in the western Pacific reaches its zenith in latitude during the late summer when the wintertime surface ridge in the opposite hemisphere is the strongest. It can reach as far as the 40th parallel in East Asia during August and 20th parallel in Australia during February. Its poleward progression is accelerated by the onset of the summer monsoon which is characterized by the development of lower air pressure over the warmest part of the various continents.[36][37] The large-scale thermal lows over continents help create pressure gradients which drive monsoon circulations.[24] In the southern hemisphere, the monsoon trough associated with the Australian monsoon reaches its most southerly latitude in February,[38] oriented along a west-northwest/east-southeast axis. Many of the world's rainforests are associated with these climatological low-pressure systems.[39]

Tropical cyclones generally need to form more than 555 km (345 mi) or poleward of the 5th parallel north and 5th parallel south, allowing the Coriolis effect to deflect winds blowing towards the low-pressure center and creating a circulation.[19] Worldwide, tropical cyclone activity peaks in late summer, when the difference between temperatures aloft and sea surface temperatures is the greatest. However, each particular basin has its own seasonal patterns. On a worldwide scale, May is the least active month while September is the most active month. November is the only month that activity in all the tropical cyclone basins possible.[40] Nearly one-third of the world's tropical cyclones form within the western Pacific ocean, making it the most active tropical cyclone basin on Earth.[41] 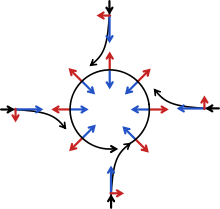 Schematic representation of flow around a low-pressure area in the Northern hemisphere. The pressure-gradient force is represented by blue arrows, the Coriolis acceleration (always perpendicular to the velocity) by red arrows
See also: Geostrophic wind and Precipitation (meteorology)