The military of the United States is deployed in more than 150[1] countries around the world, with more than 369,000 of its 1,580,255[2] active-duty personnel serving outside the United States and its territories. Most of these overseas personnel are deployed in combat zones in the Middle east, as part of the "War on Terror". Many of the remainder are located at installations activated during the Cold War, by which the US government sought to counter the Soviet Union in the aftermath of World War II.

U.S. personnel are seeing active combat in several countries, most notably Afghanistan and Iraq. Others are deployed as part of several "peacekeeping" missions.

The following are countries, listed by region, in which U.S. military personnel are deployed. Many of the numbers are based on Department of Defense statistics from December 2010.[3] These numbers do not include any military or civilian contractors, nor dependents. Countries with fewer than 25 U.S. personnel deployed are omitted. 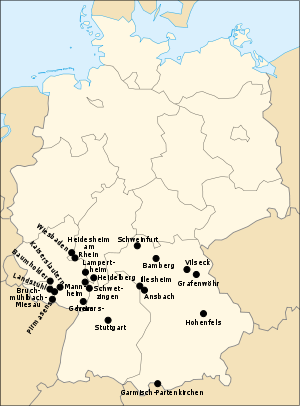 US military bases in Germany in 2009.

There are 1,226,638[2] personnel on active duty in the United States and its territories: