Department of Jobs, Enterprise and Innovation

Department of Jobs, Enterprise and Innovation 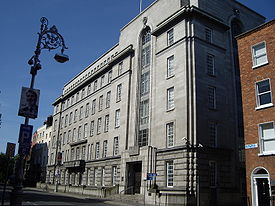 The official headquarters and Ministerial offices of the department are at 23 Kildare Street, Dublin 2. It is one of the most important economic departments in the Irish Government, responsible for the implementation of policy in five key areas:

A large element of the work of the Department arises from Ireland's membership of a number of international organisations, in particular the European Union and the World Trade Organisation. The Department plays an active role in the development of EU and WTO policies, particularly to ensure that Ireland's interests are protected. The Department is organised into five divisions. They are:

Bodies and offices associated with the Department

The Department oversees a large number of bodies and agencies. In July 2009 the Special Group on Public Service Numbers and Expenditure Programmes proposed merging the Competition Authority and the National Consumer Agency. However, this process remains at an early stage. As of 2010, the Department is no longer responsible for FÁS, which is in the process of having its responsibilities divided up between two or possibly three bodies. Bodies and agencies associated with the Department include:

The present Department of Jobs, Enterprise and Innovation was established in 2011, however, the department has existed in many forms over the years: