The Legendary Starfy, known as Densetsu no Stafy (伝説のスタフィー, Densetsu no Sutafī?, lit. "The Legendary Stafy") in Japan, series is a video game series developed by TOSE (who also developed the Game & Watch Gallery series) and published by Nintendo. The series is the only franchise that TOSE owns the copyright for, although Nintendo owns the copyright as well. The series began in 2002 with Densetsu no Stafy for the Game Boy Advance, and four sequels were released. For its first seven years, no Starfy games were officially released outside of Japan. The fifth game in the series was released as The Legendary Starfy in North America on June 8, 2009.

The following is a list of games released in the series.

The genre of the series is a special kind of platform game called "marine platform", due to the game being more about swimming than running and jumping around. Players control the protagonist of the series, Starfy, throughout each game; from the third title onward, Starly is also sometimes playable. When on land, the controls are equal to the controls of most other platform games. When in the water, players can only move Starfy around using the control pad alone; however, if players want to make Starfy swim faster, they hold the A button down while moving him around. The games are usually composed of multiple stages or worlds, with each stage split up into four sub-stages. Boss characters hide at the end of each world's final sub-stage. Most of the other sub-stages' goals are centered around retrieving a lost or stolen item for another character. Most power-ups are vehicles and costumes, some are new moves, and some are upgrades for moves and other power-ups. 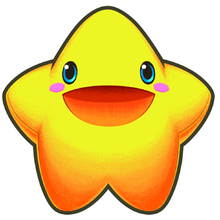 Although there had always been plans to bring the series to North America, the reason the series stayed in Japan until the announcement of the fifth game was because Nintendo of America had declared it to be "too Japanese". Nintendo of America has also considered bringing the other four games to North America in some form as well as expanding the series to the Wii, depending on "fan response".[4]

The animated television commercials loosely take place in the plot of whatever title is being advertised, as well as its gameplay. The settings and actions were slightly different compared to the ones in the titles they advertised. For instance, in the first The Legendary Starfy title, Starfy was walking inside the Tenkai Palace while carrying some stuff, including the Magic Jar holding the antagonist, Ogura, until Starfy tripped and dropped the stuff he was carrying, while the Magic Jar fell into the ocean below the Tenkai Palace. But in one of the commercials for the first title of the series, Starfy was walking outside of Tenkai Palace while only carrying the Magic Jar, until he tripped and fell in the ocean along with the Magic Jar. Except for Densetsu no Stafy 3, its commercial is the only one in The Legendary Starfy series that has a different setting. Instead of taking place anywhere in the game, the commercial takes place in a sushi bar, where the characters are standing on plates while being moved around on a conveyor belt. In the Japanese commercials for Densetsu no Stafy 4 and Densetsu no Stafy Taiketsu! Daīru Kaizokudan go back to the way the commercials for the first two titles of the series were, by making them loosely based on the plots of whatever is being advertised. While Densetsu no Stafy Taiketsu! Daīru Kaizokudan was being planned for release in North America as The Legendary Starfy, a new live-action English commercial for it takes place on a boat "The Falling Star", where an old man and his grandson, fishing, talk about catching a giant squid, the grandson is worried, until the old man assures his grandson that he doesn't have to worry, because he has Starfy. Starfy then pops out of the sea. This is the first North American commercial, airing on May 25, 2009.

Other appearances in media

While only one of The Legendary Starfy games was ever released outside of Japan, some references from the series have made cameo appearances in a few games that were released internationally. In Mario and Luigi: Superstar Saga for the Game Boy Advance, a poster in the Yoshi Theater resembles the box art of the first game in the series also for the Game Boy Advance, but titled in English as "Legend of Stafy". In Super Princess Peach for the Nintendo DS, an enemy called "Starfish" resembles the Starfy sprites of Densetsu no Stafy 4, as well as The Legendary Starfy, but with sunglasses. In the Japanese version of Donkey Konga, one of the songs is the main theme song of the series. Starfy also appears in Super Smash Bros. Brawl as one of the Assist Trophy characters, as well as a couple of Stickers and a regular Trophy, and is once again referred to as "Stafy". He attacks by using his signature spin attack against the opponents of whoever summoned him, but unlike most, he can be attacked and defeated.[5]