Ursus deningeri (Deninger's bear) is an extinct species of mammal of the family Ursidae (bears), endemic to Europe during the Pleistocene, living from ~1.8 Mya—100,000 years ago, existing for approximately 1.7 million years.

The range of this bear is almost completely confined to the European continent.[1] 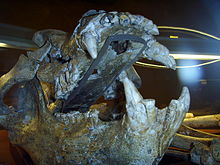 Ursus deningeri has a combination of primitive and derived characters that distinguishes it from all other Pleistocene bears. Its mandible is slender like that of Ursus arctos and Ursus etruscus. It also has derived characters of cave bears (Ursus spelaeus) and is considered to be the ancestor of Ursus savini and very close to the common ancestor of the aforementioned Ursus arctos.[2]