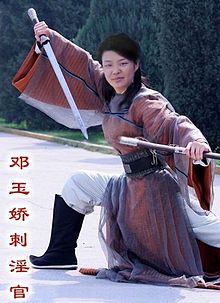 The Deng Yujiao incident (Chinese: 邓玉娇事件; pinyin: Dèng Yùjiāo Shìjiàn) occurred on 10 May 2009 at a hotel located in Badong County, Hubei province, in the People's Republic of China.[1] Deng Yujiao, a 21-year-old female pedicure worker, tried to rebuff the advances of Deng Guida (邓贵大; no relation), director of the local township business promotions office, who had come to the hotel seeking sexual services.[2] She allegedly stabbed her assailant several times trying to fight him off, resulting in his death. Badong County police subsequently arrested Deng Yujiao and charged her with homicide and refused to grant her bail.

This case came to national prominence through internet forums and chatrooms, where netizens were enraged by her treatment. The case resonated with the public anger over the corruption and immorality of officials, and garnered over four million forum posts across the country.[3] Chinese authorities attempted to play down the incident by limiting its presence on Chinese web portals, and a large number of discussion threads were censored.[4] Following groundswell of public protests and online petitions, prosecutors dropped murder charges, granted her bail,[2] and charged her with a lesser offense of "intentional assault".[5] She was found guilty, but did not receive a sentence due to her mental state. The two surviving officials involved in the incident were sacked, also ostensibly in response to public pressure.[6]

Deng Guida was the director of the local township's business promotions office. He, his deputy, Huang Dezhi (黄德智), and one other official arrived at the hotel where Deng Yujiao worked on 10 May 2009, and allegedly requested "special services" (a euphemism commonly taken to mean sexual services in China) from Deng Yujiao. She did not submit to the requests.[6] Deng Guida had allegedly pulled out a stack of banknotes worth ¥ 4000 and slapped her in the face with it in order to show off his wealth. He then pushed the Deng Yujiao onto a sofa and proceeded to lay on top of her. At this moment, in self-defense, Deng Yujiao used a small 3 inch knife and stabbed her assailant four times. One of the stabs landed in her assailant's neck, causing him to bleed to death at the scene.[7] His deputy was also stabbed. Police, who apparently found pills in her purse,[3] said Deng Yujiao may have been suffering from acute depression, and took her to a psychiatric hospital on 12 May for examination.[6] During Deng's days in the hospital her arms and ankles were tied to the bed, which was referred to by the police as "a procedure of protection".

Two lawyers from Beijing, Xia Lin (夏霖) and Xia Nan (夏楠) took on her case pro bono, and on 25 May 2009, they lodged an official complaint against one of the attackers, Huang Dezhi at the Badong police station. Details of the complaint:

On 22 May 2009, Yang Liyong (楊立勇) was interviewed by Southern Metropolis Daily, during which he presented the official police version of the incident. 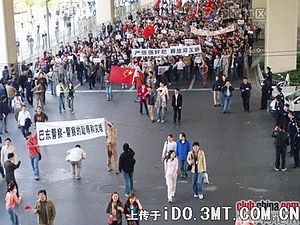 After Deng turned herself in to the Police, she was initially charged with murder. Deng claimed she acted in self-defense after the official attempted to rape her. Blogger Wu Gan, wrote about her case in his blog. A Berkeley professor remarked to the New York Times that instead of garnering hundreds of thousands of mentions on Internet blogs and other forums, Deng’s case accumulated in excess of four million posts across different websites.[3] Deng's plight struck a note with millions of Chinese fed up with low-level corruption and "rampant social injustice and the lack of fundamental respect in society", in the words of a Beijing lawyer.[4] Deng was hailed as a national hero for resisting official abuse of power. Her supporters, who demanded a fair trial, took their protest to Beijing. Their visual stunt was a woman wearing a mask and wrapped in white cloth; a sign saying "Anyone could be Deng Yujiao" was laid on the ground around her. The photos immediately appeared on the Internet.[3]

Chinese bloggers showed their solidarity with Deng Yujiao by distributing free T-shirts on the net with popular slogans like:

As a result of the national outcry, Police released her on bail,[2] put her under house arrest;[4] prosecutors charged her with a lesser offense of "intentional assault" instead of murder.[5] The two surviving officials were sacked on 31 May. Xinhua reported that Badong County Communist Party Discipline Inspection Committee removed Huang Dezhi from the post of vice director of the office of business delegations of Yesanguan Township, and stripped of his CPC membership, as he had "pushed and shoved and verbally insulted a waitress who refused to accompany them to take a bath" in a bathhouse on 10 May in Badong, the authorities said. Huang has been "detained in connection with public order offences." Deng Zhongjia, 45, another vice director of the same office who was present at the time of the incident, was also fired, osetensibly because the incident had caused a "bad social effect" although he had not broken any laws or regulations.[11]

The Badong county police said that an official had been killed whilst in a quarrel with Deng Yujiao. Their statement issued on 13 May said that Deng Guida twice pushed the girl onto a sofa, and was killed by a pedicure knife. Police said that the murder weapon was a fruit knife five days later.[4]

Meng Jianzhu, minister of the Ministry of Public Security of the People's Republic of China, allegedly gave instruction to his deputy:

Deng Yujiao's mother received a call, purportedly from the police, after which she washed most of her daughter's clothes thereby removing potential physical evidence. The police also announced on 23 May that she had hired two Hubei lawyers to replace the initial lawyers who, it was alleged, had breached Deng Yujiao's privacy.[4]

On approximately 22 May, Beijing censors ordered websites to stop reporting the case. The State Council Information Office issued directives to all Chinese websites to remove all the recommended news stories and commentaries on Deng Yujiao. No posts about Deng Yujiao must be placed at the top of the page. Later on, the Beijing Information Office also telephoned various portals instructing them to use only official government statements and not report or comment on Deng Yujiao. The State Information Office also order media and web portals to dilute the Deng Yujiao case with other news, delete any open letters and pleadings, and bar any web based opinion poll or petition.[14][15]

Television and the Internet were cut off in Yesanguan, officially as a precaution against lightning strikes. The Internet attention drew Chinese journalists to Badong County. But after censorship was imposed, local officials began screening outsiders, and some journalists seeking to report there were beaten. The blog of Wu Gan, which had publicised Deng's case, was shut down by censors.[3]

According to the media, her murder charge was changed to intentional assault, most likely following massive public pressure from internet users who hailed her as a heroine.[5] At her trial on 16 June, a judge said the court had found her guilty because Deng had used excessive force even though she was acting in self-defense. The lenient sentence was on account of diminished responsibility, and because she had surrendered to police and the officials involved had made a major mistake. One Beijing human rights lawyer said the court would not have freed Deng if there was not so much pressure from so much national attention. The Standard reported that mainland websites were euphoric after the trial.[5]