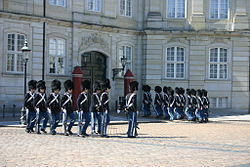 Ceremonial Changing of the Guard of Den Kongelige Livgarde in Copenhagen

The Royal Life Guards (Den Kongelige Livgarde) is an infantry regiment of the Danish Army, founded in 1658 by King Frederik III. It serves in two roles: as a front line combat unit, and as a guard/ceremonial unit to the Danish monarchy. The Royal Guards provide a permanent guard at the Amalienborg Palace, Kastellet (part of the old fortification of Copenhagen), Rosenborg Castle/garrison of the Royal Guards in Copenhagen and the garrison of Høvelte. On occasions guard is kept at Fredensborg Palace, Marselisborg Palace, Gråsten Palace, Christiansborg Palace and other locations inside the Danish realm.

The ordinary uniform of the Royal Life Guards while they are on guard duty is dark blue. Their full dress uniform is very similar to that of the Foot Guards regiments of the British Army: a scarlet tunic; blue trousers; and a bearskin with the regiment's cap badge (the Sun and Royal Coat of Arms); together with the symbolic infantry sabre, which is part of the spoils from the First Schleswig War 1848-1850 and originally a French infantry sabre. During his time in the Danish forces, Crown Prince Frederik served a tour in the Royal Guards with the rank of Sergeant.

The regiment itself has three battalions: