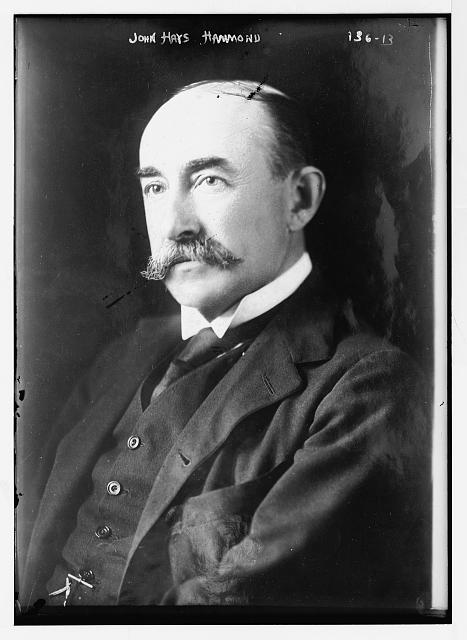 John Hays Hammond ( &ndash; ) was a famous , , and . Known as the man with the , he amassed a sizable fortune before the age of 40. An early advocate of deep-level mining, Hammond was given complete charge of ' mines in and made each undertaking a financial success. But after the dismal failure of the , Hammond, along with the other leaders of the Johannesburg Reform Committee, was arrested and subsequently sentenced to death. The Reform Committee leaders were released after paying large fines, but like many of the leaders, Hammond left Africa for good. He returned to the United States, became a close friend of President , and was appointed a special U.S. Ambassador. At the same time, he continued to develop mines in and and, in 1923, he made another fortune while drilling for oil with the Burnham Exploration Company. His son, , became famous in his own right, patenting over 400 inventions, and is widely regarded as the father of "radio control".

The son of Major Richand Pindell Hammond, a graduate who fought in the , and Sarah Hays Lea, sister to the famed Captain John C. Hays of the Texas Rangers.

Hammond took his first mining job as a special expert for the 1879-1880 in Washington, DC. He returned to California in 1881 to work for Senator Hearst, the mining magnate and father of . In 1882, he was sent to hostile country in , near , to become superintendent of Minas Neuvas. When a revolution broken out, Hammond barricaded his family in a small house and fought off the attacking guerrillas.

From 1884-1893, Hammond worked in San Francisco as a consulting engineer for Union Iron Works, Central Pacific Railway and Southern Pacific Railway. In 1893, Hammond left for South Africa to investigate the gold mines in Transvaal for the Barnato Brothers. In 1894, he joined the Company to work with and opened mines in the Rand, in (territory which became (now ). In 1895, he was managing Rhodes' property in , with headquarters at . An early advocate of deep-level mining, Hammond was given complete charge of Rhodes' gold and diamond mines and made each undertaking a financial success. While working for Rhodes, he made his world-wide reputation as an engineer. He continued to work for Rhodes until 1899, but events in Africa would go on to change Hammond's life forever.

When Hammond arrived in the Transvaal, the political situation was tense. The gold rush had brought in a considerable foreign population of workers, chiefly British and American, whom the Boers referred to as "Uitlanders" (foreigners). These immigrants, manipulated by Rhodes, formed a Reform Committee headed by Colonel Frank Rhodes (brother of Cecil), Hammond, and others. They demanded a stable constitution, a fair franchise law, an independent judiciary, a better educational system, and charged that the Government under President had made promises, but failed to keep them. These demands were orchestrated by Rhodes, knowing that Kruger would never accede to them, justifying subsequent intervention by the British government to protect the supposed interests of British miners, the vast majority of whom had no desire to vote or settle in the Transvaal. Civility finally collapsed when , the 's Administrator General for , prematurely invaded the Transvaal with 1 500 troops in the ill-fated and was captured by the Boers in December 1895. Shortly thereafter, the Boer government arrested Hammond and most of members of the Reform Committee and kept them in deplorable conditions. The U.S. Senate petitioned President Kruger for clemency.

The Reform Committee case was heard in April. Hammond, , , and , all of whom had signed an incriminating document found with Jameson's raiders, were sentenced to be hanged, but Kruger commuted the sentence the next day. For the next few weeks, Hammond and the others were kept in jail under deplorable conditions. In May it was announced that they would spend 15 years in prison, but by mid-June Kruger commuted the sentences of all, Hammond and the other lesser figures each paying a ₤2,000 fine. The ringleaders had been shipped off to London to be dealt with by the imperial Government, paying fines of ₤25,000 each. All fines, amounting to some ₤300,000, were paid by Rhodes. Shortly hereafter, Hammond left for England.

About 1900, the now famous Hammond moved to the U.S., and reported on mining properties in the U.S. and Mexico. He became a professor of mining engineering at Yale University 1902-1909, and from 1903-1907, he was employed by as a highly-paid general manager and consulting engineer for the . While active in the Republican Party, Hammond became a close friend of President , whom he had known since his student days at Yale. Taft then sent him to the coronation of George V in 1911 as a special U.S. Ambassador, and twice sent him to assist on irrigation and other engineering problems. In addition to Taft, Hammond also befriended Presidents Grant, Hayes, Roosevelt, and Coolidge.

In 1907, Hammond became the first president of the and he remained present of the club until it disbanded in 1928.

Hammond became chairman the U.S. Coal Commission, 1922-1923. His close friendship and long time business associations with , the highly decorated Scout who he knew from Africa, led Hammond to became a wealthy oil man when Burnham Exploration Company struck oil at Dominguez Hill, near , in 1923.

May 1926: A Celebration of Hammond

In May 1926, an organization called "The Company of Friends of John Hays Hammond" sponsored eleven dinners around the world (, , , , , , etc) in honor of Hammond. Over 10,000 people wrote tributes to Hammond, including: Hearst whose father gave him his first job, whose father () took him to South Africa, Sir who was condemned to death with him, the Guggenheims who employed him at a fabulous salary, former President Taft who offered him an Ambassador position, and President who consulted with him on the coal situation. The event was so extraordinary that ""Time" magazine" put Hammond on the cover of the , issue and ran a biographical sketch on him called "Unique".

He died of coronary occlusion on , , in Gloucester, Massachusetts.

He married Natalie Harris Lum, of Harris, Mississippi (near Vicksburg) on , 1881, in Hancock, Maryland. Together they had three sons and one daughter.
(1888 - February 12, 1965) was born in San Francisco, California. In 1893 he moved with his family to South Africa, and five years later the family moved to England. The family returned to the United States in 1900, and Hammond attended Lawrenceville School, started inventing, and went on to study at the Sheffield School of Yale University, graduating in 1910. He established the Hammond Radio Research Corporation in 1911 and eventually developed a radio controlled torpedo system for the navy, which he successfully demonstrated in 1918. Between 1926 and 1929, he built a medieval-style castle in .

Harris Hays Hammond, a financier, became president of Dominguez Oil Fields Company, which earned him $2 million in 1936, and president of Laughlin Filter Corporation, a small New Jersey company which manufactures centrifuges. In 1928, he and Anthony "Tony" Joseph Drexel Diddle Jr. were among the directors of Acoustic Products Co., which later became Sonora Products Corp. of America.