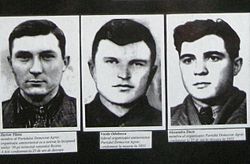 The leader of the Democratic Agrarian Party was Vasile Odobescu. During the Soviet deportations from Bessarabia and Northern Bukovina, his family was deported from Bessarabia.

In 1953, Vasile Odobescu was sentenced to death[3] and Ilarion Tautu and Alexandru Duca were sentenced to 25 years in prison.