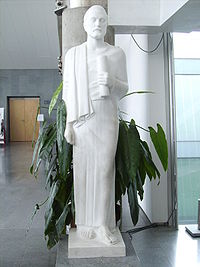 Statue of Demetrius at the entrance of the Bibliotheca Alexandrina

Demetrius of Phalerum (also Demetrius of Phaleron or Demetrius Phalereus, Greek: Δημήτριος Φαληρεύς; c. 350 BC – c. 280 BC[1]) was an Athenian orator originally from Phalerum, a student of Theophrastus and one of the first Peripatetics. Demetrius was a distinguished statesman who was appointed by Cassander to govern Athens, where he ruled as sole ruler for ten years, introducing important reforms of the legal system while maintaining pro-Cassander oligarchic rule. He was exiled by his enemies in 307 BC, and he went first to Thebes, and then, after 297 BC, to the court of Alexandria. He wrote extensively on the subjects of history, rhetoric, and literary criticism.

Demetrius was born in Phalerum, c. 350 BC. He was the son of Phanostratus, a man without rank or property.[2] He was educated, together with the poet Menander, in the school of Theophrastus.[3] He began his public career about 325 BC, at the time of the disputes concerning Harpalus, and soon acquired a great reputation by the talent he displayed in public speaking. He belonged to the pro-oligarchic party of Phocion; and he acted in the spirit of that statesman. When Xenocrates was unable to pay the new tax on metics (foreign residents) c. 322 BC, and the Athenians threatened him with slavery, he was only saved (according to one story) when Demetrius purchased his debt and paid his tax.[4] After the death of Phocion in 317 BC, Cassander placed Demetrius at the head of the administration of Athens. He filled this office for ten years, instituting extensive legal reforms. The Athenians conferred upon him the most extraordinary distinctions (almost all of which were revoked after his later expulsion from Athens), and no less than 360 statues were erected to him.[5] However, Demetrius was unpopular with the lower classes of Athenians and with pro-democratic political factions, who resented the limitations he placed on the democratic franchise and viewed him as little more than a pro-Macedonian puppet ruler.[6]

He remained in power until 307 BC when Cassander's enemy, Demetrius Poliorcetes captured Athens, and Demetrius was obliged to take to flight.[7] It was claimed that during the latter period of his administration he had abandoned himself to every kind of excess,[8] and we are told he squandered 1200 talents a year on dinners, parties, and love affairs. Carystius of Pergamum mentions that he had a lover by the name of Diognis, of whom all the Athenian boys were jealous.[9] After his exile, his enemies contrived to induce the people of Athens to pass the death sentence upon him, in consequence of which his friend Menander nearly fell a victim. All his statues, with the exception of one, were demolished.

Demetrius first went to Thebes,[10] and then (after Cassander's death in 297 BC) to the court of Ptolemy I Soter at Alexandria, with whom he lived for many years on the best terms, and who is even said to have entrusted to him the revision of the laws of his kingdom.[11] During his stay at Alexandria, he devoted himself mainly to literary pursuits, ever cherishing the recollection of his own country.[12] On the accession of Ptolemy Philadelphus, Demetrius was sent into exile to Upper Egypt, where he is said to have died of the bite of a snake.[13] His death appears to have taken place soon after the year 283 BC.

Demetrius was the last among the Attic orators worthy of the name,[14] after which the activity went into a decline. His orations were characterised as being soft, graceful, and elegant,[15] rather than sublime like those of Demosthenes. His numerous writings, the greater part of which he probably composed during his residence in Egypt,[16] embraced a wide range of subjects, and the list of them given by Diogenes Laërtius[17] shows that he was a man of the most extensive acquirements. These works, which were partly historical, partly political, partly philosophical (e.g. Aisopeia, a collection of Aesopic Fables), and partly poetical, have all perished. The work On Style (Greek: περὶ ἑρμηνείας) which has come down under his name, is the work of a later writer, c. 2nd century AD.

The performance of tragedy had fallen into disuse in Athens, on account of the great expense involved[18]. In order to afford the people less costly and yet intellectual amusement, he caused the Homeric and other poems to be recited on the stage by rhapsodists.[19]

According to Strabo,[20] Demetrius inspired the creation of the Mouseion, better known as the Library of Alexandria, which was modeled after the arrangement of Aristotle's school. The Mouseion contained a peripatos (covered walkway), a syssition (room for communal dining) and a categorized organization of scrolls.