In general the demagnetizing field is a function of position H(r). It is derived from the magnetostatic equations for a body with no electric currents.[2] These are Ampère's law

The magnetic field and flux density are related by[5][6]

The general solution of the first equation can be expressed as the gradient of a scalar potential U(r):

Inside the magnetic body, the potential Uin is determined by substituting (3) and (4) in (2):

Outside the body, where the magnetization is zero,

At the surface of the magnet, there are two continuity requirements:[5]

This leads to the following boundary conditions at the surface of the magnet:

Here n is the surface normal and

is the derivative with respect to distance from the surface.[9]

The outer potential Uout must also be regular at infinity: both |r U| and |r2 U| must be bounded as r goes to infinity. This ensures that the magnetic energy is finite.[10] Sufficiently far away, the magnetic field looks like the field of a magnetic dipole with the same moment as the finite body.

Uniqueness of the demagnetizing field

Any two potentials that satisfy equations (5), (6) and (7), along with regularity at infinity, are identical. The demagnetizing field Hd is the gradient of this potential (equation 4).

The energy of the demagnetizing field is completely determined by an integral over the volume V of the magnet:

Suppose there are two magnets with magnetizations M1 and M2. The energy of the first magnet in the demagnetizing field Hd(2) of the second is

The reciprocity theorem states that[9]

Magnetic charge and the pole-avoidance principle

Formally, the solution of the equations for the potential is

where r′ is the variable to be integrated over the volume of the body in the first integral and the surface in the second, and ∇′ is the gradient with respect to this variable.[9] 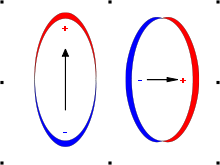 Illustration of the magnetic charges at the surface of a single-domain ferromagnet. The arrows indicate the direction of magnetization. The thickness of the colored region indicates the surface charge density.

One way to remove the magnetic poles inside a ferromagnet is to make the magnetization uniform. This occurs in single-domain ferromagnets. This still leaves the surface poles, so division into domains reduces the poles further. However, very small ferromagnets are kept uniformly magnetized by the exchange interaction.

The concentration of poles depends on the direction of magnetization (see the figure). If the magnetization is along the longest axis, the poles are spread across a smaller surface, so the energy is lower. This is a form of magnetic anisotropy called shape anisotropy. 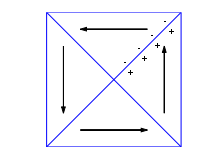 Illustration of a magnet with four magnetic closure domains. The magnetic charges contributed by each domain are pictured at one domain wall. The charges balance, so the total charge is zero.

If the ferromagnet is large enough, its magnetization can divide into domains. It is then possible to have the magnetization parallel to the surface. Within each domain the magnetization is uniform, so there are no volume poles, but there are surface poles at the interfaces (domain walls) between domains. However, these poles vanish if the magnetic moments on each side of the domain wall meet the wall at the same angle (so that the components n · M are the same but opposite in sign). Domains configured this way are called closure domains.

where M0 is the magnetization of the sphere and γ is called the demagnetizing factor and equals 4π/3 for a sphere.[5][6][11]

This equation can be generalized to include ellipsoids having principal axes in x,y, and z directions such that each component has a relationship of the form:[6]

Other important examples are an infinite plate (an ellipsoid with two of its axes going to infinity) which has γ = 4π in a direction normal to the plate and zero otherwise and an infinite cylinder (an ellipsoid with one of its axes tending toward infinity with the other two being the same) which has γ = 2π along its axis. For tables or equations for the magnetizing factors of the general ellipsoid see Osborn 1945.