Dinner in honor of Admiral Campion at Delmonico's in 1906 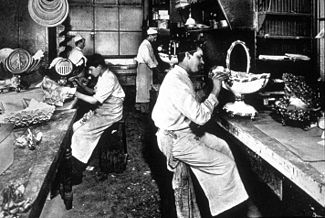 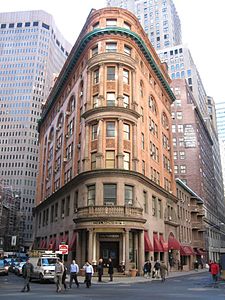 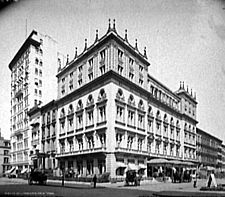 Delmonico's is the name of series of restaurants of varying duration, quality, and fame located in New York City. The original and most famous was operated by the Delmonico family during the 19th and early 20th centuries, closing due to a Prohibition-era slowdown in 1923. Since that time restaurants using the Delmonico's name have reopened in one of the historic locations in lower Manhattan under different proprietors.

The original Delmonico's began in a rented pastry shop at 23 William Street in 1827, appearing listed as a restaurant in 1830. Relocating several times before settling at 2 South William Street for eighty years, it is credited with being the first restaurant in America to allow patrons to order from a menu à la carte, as opposed to table d’hôte. It is also claimed to be the first to employ a separate wine list.[citation needed].

As the decades passed this Delmonico's reputation spread, being widely regarded as one of the nation's top fine dining establishments[1][2] and birthplace of the universally imitated Delmonico steak. At the peak of "Delmonico's" fame the family operated four restaurants under the name simultaneously, and a total of ten during their tenure.

Six years after they closed the doors of their final iteration restaurateur Oscar Tucci opened a revived Delmonico's at 2 South William Street, which stayed in business until 1977. Other Delmonicos have operated in the space from 1981–1992 and from 1998 to present.

The restaurant was opened by the brothers John and Peter Delmonico, from Ticino, Switzerland. In 1831, they were joined by their nephew, Lorenzo Delmonico, who eventually became responsible for the restaurant's wine list and menu. When the William Street building was opened on a grand scale in August 1837, after the Great Fire of New York, New Yorkers were told that the columns by the entrance had been imported from the ruins of Pompeii.[3]

Beginning in the 1850s, the restaurant hosted the annual gathering of the New England Society of New York which featured many important speakers of the day. In 1860, Delmonico's provided the supper at the Grand Ball welcoming the Prince of Wales at the Academy of Music on East 14th Street. Supper was set out in a specially constructed room; the menu was French, and the pièces montées represented Queen Victoria and Prince Albert, the Great Eastern and Flora's Vase. The New York Times reported, "We may frankly say that we have never seen a public supper served in a more inapproachable[4] fashion, with greater discretion, or upon a more luxurious scale".[5] In 1862, the restaurant hired Charles Ranhofer, considered one of the greatest chefs of his day.

The business was so successful that from 1865 to 1888 it expanded to four restaurants of the same name. At various times, there were Delmonico's at ten locations. Delmonico's vacated the six-story Delmonico Building at Fifth Avenue and 26th Street in 1899. The edifice was sold to John B. Martin, owner of the Martin Hotel, in May 1901.[6]

In 1919, Edward L.C. Robins purchased Delmonico's. Its grand location at Fifth Avenue and 44th Street closed in 1923 as a result of changing dining habits due to Prohibition. That location was the final incarnation of Delmonico's with continuity to the original.[7]

In 1929, Oscar Tucci opened a "Delmonico's" popularly called "Oscar's Delmonico's" at the former Delmonico's location at 2 South William Street (sometimes listed as 56 Beaver Street) in New York. The Tucci incarnation adopted the original menus and recipes, and became distinguished in its own right, continuing to attract prominent politicians and celebrities. It was open continuously until it closed in 1977.[9]

The building was vacant until 1998, when the Bice Group acquired the property and again opened a Delmonico's, with Gian Pietro Branchi as executive chef. In 1999, the restaurant was sold to the Ocinomled partnership, which continues to operate Delmonico's at the South William Street location. 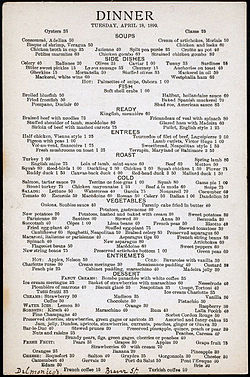 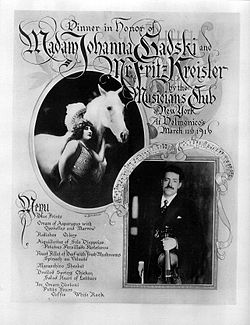 Lobster Newburg,[7] and Delmonico Potatoes were invented at Delmonico's restaurant, and possibly Chicken à la King,[11] but it was most famous for Delmonico steak. Eggs Benedict were also said to have originated at Delmonico’s, although others claim that dish as well.[12][13][14] Baked Alaska's name was coined at Delmonico's as well.[citation needed]

Among the many well-known people who patronized Delmonico's are Jenny Lind, who, it was said, ate there after every show, Theodore Roosevelt, Mark Twain, "Diamond Jim" Brady, Lillian Russell, usually in the company of Diamond Jim, Charles Dickens, Oscar Wilde, J.P. Morgan, James Gordon Bennett, Jr., Walter Scott, Nikola Tesla, Edward VII, then the Prince of Wales, and Napoleon III of France. Journalist Jacob A. Riis claimed to be a patron of a different sort: in his book, The Making of an American, he mentioned that when he was down on his luck, a kindly French-speaking cook at Delmonico’s would pass him rolls through the basement window.

The New Orleans, Louisiana, Delmonico's, which opened in 1895, was purchased by Emeril Lagasse in 1997. Lagasse refurbished the restaurant and reopened it as Emeril’s Delmonico.

The unconnected Delmonico's Hotel, at Park Avenue and East 59th Street, was a center of Beatlemania in August 1964, when the Beatles stayed there.[15]

Delmonico's is mentioned in the movie Meet Me in St. Louis (1944), the story of a middle-class family in St. Louis at the turn of the century, as the place from which a well-to-do suitor places a long-distance call to a member of the family. In the stage show and movie, Hello Dolly!, the restaurant is mentioned as one of the 'must-see' locations in NYC in the song, "Put On Your Sunday Clothes". Delmonico's is also mentioned in the movie She Wore a Yellow Ribbon (1949), a John Ford western set in 1876.[16]