The Simonetti family is an Italian noble family with origins in Tuscany. During the 12th Century different branches in Florence, Lucca, Pistoia and Pescia developed. Other famous branches of this family were established in Jesi, Milan and Bologna.

Members of this family have held different titles since the Middle Ages, among them: Lords of Jesi, Princes of Musone, marquis in the kingdom of Naples and Rome, counts in the kingdom of Italy and Bologna, senators of Rome and the Kingdom of Italy.[1][2][3] The Simonetti also held positions in the Republic of Florence and the Republic of Lucca, among them priori of the signoria, gonfaloniere, captains, members of the council of the elders and the leadership of the Guelph party.[4][5][6]

Origin of the family 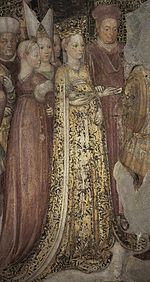 According to Eugenio Gamurrini and Lodovico Jacobilli the Simonetti from Jesi, Lucca, Florence, Osimo, Cingoli, Terni and Milan had a single origin. Gamurrini linked the Florentine branch of the family to medieval Lucca but could not find the common ancestor that linked the Simonetti from Tuscany to the Simonetti from Jesi. He pointed to other facts that indicated the connection and the earlier research done by Jacobilli. According to Jacobilli the Simonetti branches were all descendants of a single line of Lombard barons that held fiefs in central Italy.[7] Gamurrini in his Istoria genealogica delle famiglie nobili Toscane et Umbre studied manuscripts that linked the Simonetti of Milan, Lucca and Florence to Teuprando, a Lombard lord living in Lucca and a descendant of Aripert I, King of the Lombards (see Bavarian Dynasty). Other noble families from Lucca also recognized Teuprando as their ancestor, including the Rolandinghi, Soffredinghi, and Opezinghi. All these families held control of vast areas in the Garfagnana region and held castles around the Lombard city of Barga.[8]

Other historians such as Lord Vernon were more conservative in their studies and researched documentation up to the beginning of the 13th century, still older documentation survived including documents related to Ranerio Simonecti (Raniero Simonetti), a Florentine nobleman who was alive in 1188[9] and who was also mentioned by E. Gamurrini. Vernon also studied the family’s lordship of parts of the Val d’ Elsa and the castle of Colle.[10]

According to Villani the family was forced to renounce all its titles in Florence and was reduced to popolani (common citizens). The same happened in Lucca, by the beginning of the 15th century they had lost all prerogatives of nobility in Lucca and Florence, however were still recognized as patricians. 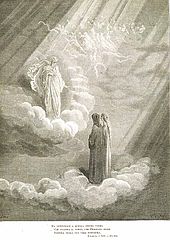 Dante mentions the family by della Sannella, one of the ancient names of the family.[10] Dante placed the Simonetti family in Paradiso XVI, among the ancient noble families of Florence and Cacciaguida.

In the Divine comedy, in Paradiso XVI, Dante says:

Therefore should not appear a marvellous thing
What I shall say of the great Florentines
Of whom the fame is hidden in the Past.

I saw the Ughi, saw the Catellini,
Filippi, Greci, Ormanni, and Alberichi,
Even in their fall illustrious citizens;

And saw, as mighty as they ancient were,
With him of La Sannella, him of Arca,
And Soldanier, Ardinghi, and Bostichi.[11] 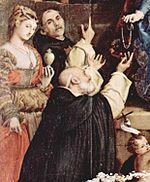 Detail of the painting Madonna del Rosario by Lorenzo Lotto. The lady in the painting is according to local tradition Sperandia Simonetti, a noblewoman from Cingoli.[12]

The Simonetti first arrived in Jesi in the 12th century. According to Gamurrini, they were sent by emperor Barbarossa to govern Jesi as vicars. The first member of this family to appear in a document from Jesi was Raniero son of Capthio in 1201. Raniero was elected podestà of Jesi in 1216.[13] He had four sons, named: Simonetto, Capthio, Gualtiero and Bartolo. The last three became lords of the castle of Castriccione around Cingoli. Bartolo later joined the Sylvestrines and became leader of the order. Simonetto was elected podestà of Cerlongo and was the ambassador of Jesi to the government of the Marche. Simonetto had seven sons; among them were Mercenario Simonetti, a famous condottiero, Muzzolo and Oddone Simonetti, the last two became Lords of Donazzano. By 1286 the family was very powerful. As a result they attracted the attention of the Pope and other lords. They were at this time Lords of Castriccione, the castle of Sasso, near Serra San Quirico, the castle of Santa Maria Nuova and other possessions in the Marche. Some members of the family joined the ghibellines during the 13th century and caused a struggle with Rome. The guelphs took Jesi and confiscated the property of the Simonetti and expelled the family from Jesi. In 1298 Rinaldo Simonetti signed a treaty with other nobles swering allegiance to pope Boniface VIII.

Walls of Jesi built in the 13th century.

After struggles with the Malatesta family, Tano di Baligano, and Rome, the family returned to Jesi in the 14th century where Filippo Simonetti and Lomo Simonetti were De facto Lords of Jesi. The Church later recognized the lordship of Jesi by the Simonetti and declared the family vicars of the Holy See. The lordship was confirmed a second time by Pope Boniface IX in a papal bull from May 6, 1397. The family was banished from Jesi for a second time in the 15th century.[14] From this branch of the Simonetti originated the Simonetti from Osimo, Ancona and Cingoli. Some members of the Simonetti of Jesi migrated to Calabria, a famous member of this branch was Cicco Simonetta, secretary of Francesco Sforza.[15] According to Crollalanza the name was modified to Simonetta in Calabria.[15]

In a papal bull of August 9, 1805 Pope Pius VII created the title of Prince of Musone for Count Don Raniero Simonetti from Ancona and his descendants.[15] From this branch was also Cardinal Raniero Simonetti, governor of Rome in the 18th century. 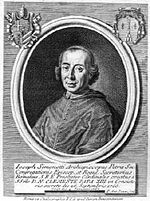 Cardinal Giuseppe Simonetti from Sabina, he used the coat of arms of the Simonetti of Sabina.

Richard W. Kaeuper, Bankers to the Crown: The Riccardi of Lucca and Edward 1 (Princeton 1973)