In the Internet's standard e-mail protocol SMTP, a bounce message, also called a Non-Delivery Report/Receipt (NDR), a (failed) Delivery Status Notification (DSN) message, a Non-Delivery Notification (NDN) or simply a bounce, is an automated electronic mail message from a mail system informing the sender of another message about a delivery problem. The original message is said to have bounced.

Errors can occur at multiple places in mail delivery. A sender may sometimes receive a bounce message from the sender's mail server, and other times from a recipient's mail server. Bounce-back messages from the recipient's mail server are required when a mail server accepted a message that was undeliverable; when a server accepts a message for delivery, it is also accepting the responsibility to deliver a DSN in the event the delivery fails. With the rise in forged spam and e-mail viruses, users now frequently receive erroneous bounce messages sent in response to messages they never actually sent. Modern servers try hard to ascertain that a message can be delivered before they accept it.

Imagine that Jack (jack@store.example) sends a message to Jill (jill@library.example) at a different site. Once Jack's mail server has accepted the message, it must either pass it along to Jill's mail server, or else deposit a bounce message in Jack's mailbox.

The library.example mail server then must send a bounce message to jack@store.example, informing Jack that his message to Jill's mailbox could not be delivered.

However, problems arise if Jill's mail server receives a message with a forged From: field, e.g., if spammer@example.net sends an unsolicited bulk message claiming to be from jack@store.example. In this case, Jill's mail server would send the bounce message to Jack even though Jack never sent the original message to Jill. This is called backscatter.

accept-then-bounce backscatter may be a type of spam,. Effort should be made to reject the message during the SMTP session to avoid participating in e-mail abuse of innocent third parties.

Bounces are a special form of autoresponder. Auto replies are mails sent by a program—as opposed to a human user—in reply to a received mail and sent to the bounce address.

Today these paths are normally reduced to ordinary e-mail addresses, as the old SMTP 'source routing' was deprecated in 1989; for some historical background info see Sender Rewriting Scheme. One special form of a path still exists: the empty path MAIL FROM:<>, used for many auto replies and especially all bounces.

In a strict sense, bounces sent with a non-empty Return-Path are incorrect. RFC 3834 offers some heuristics to identify incorrect bounces based on the local part (left hand side before the "@") of the address in a non-empty Return-Path, and it even defines a mail header field, Auto-Submitted, to identify auto replies. But the mail header is a part of the mail data (SMTP command DATA), and MTAs typically don't look into the mail. They deal with the envelope, that includes the MAIL FROM address (a.k.a. Return-Path, Envelope-FROM, or "reverse path") but not, e.g., the RFC 2822-From in the mail header field From. These details are important for schemes like BATV.

The remaining bounces with an empty Return-Path are non-delivery reports (NDRs) or delivery status notifications (DSNs). DSNs can be explicitly solicited with an SMTP Service Extension (ESMTP), however it is not widely used. Explicit requests for delivery failure details is much more commonly implemented with variable envelope return path (VERP), while explicit requests for them are rarely implemented.[1]

Excluding MDAs, all MTAs forward mails to another MTA. This next MTA is free to reject the mail with an SMTP error message like "user unknown", "over quota", etc. At this point the sending MTA has to bounce the message, i.e. inform its originator. A bounce may arise also without a rejecting MTA, or as RFC 5321 puts it:

"If an SMTP server has accepted the task of relaying the mail and later finds that the destination is incorrect or that the mail cannot be delivered for some other reason, then it MUST construct an "undeliverable mail" notification message and send it to the originator of the undeliverable mail (as indicated by the reverse-path)."

This rule is essential for SMTP: as the name says, it's a 'simple' protocol, it cannot reliably work if mail silently vanishes in black holes, so bounces are required to spot and fix problems.

Today, however, most email is spam[citation needed], which usually utilizes forged Return-Paths. It is then often impossible for the MTA to inform the originator, and sending a bounce to the forged Return-Path would hit an innocent third party. In addition, there are specific reasons why it is preferable to silently drop a message rather than reject it (let alone bounce it):

"As discussed in Section 7.8 and Section 7.9 below, dropping mail without notification of the sender is permitted in practice. However, it is extremely dangerous and violates a long tradition and community expectations that mail is either delivered or returned. If silent message-dropping is misused, it could easily undermine confidence in the reliability of the Internet's mail systems. So silent dropping of messages should be considered only in those cases where there is very high confidence that the messages are seriously fraudulent or otherwise inappropriate."

Not validating the sender is an inherent flaw in today's SMTP, which is without the deprecated source routes mentioned earlier. This is addressed by various proposals, most directly by BATV and SPF.

Causes of a bounce message

There are many reasons why an e-mail may bounce. One reason is if the recipient address is misspelled, or simply does not exist on the receiving system. This is a user unknown condition. Other reasons include resource exhaustion — such as a full disk — or the rejection of the message due to spam filters. In addition, there are MUAs that allow users to bounce a message on demand.[2]

Typically, a bounce message will contain several pieces of information to help the original sender in understanding the reason his message was not delivered: 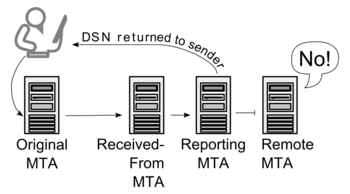 MTAs involved in a reject are named according to the point of view of the Reporting MTA. MTA names are often of type dns.

A DSN may be a MIME multipart/report message composed of three parts:

The second part of a DSN is also quite readable. It is essential to understand which MTA played which role. The Reporting-MTA is responsible for composing and sending the DSN.

When a Remote-MTA rejects a message during an SMTP transaction, a field Diagnostic-Code of type smtp may be used to report that value. Note that beside the numerical 3-digit value, the SMTP response contains itself a human readable part. The information

is sometimes reported as, e.g.,