Throughout the Mortal Kombat universe, the warriors were growing too strong and numerous for the realms to handle. The warriors' powers threaten to utterly destroy the fabric of the MK universe. Upon this scene, the Elder Gods demanded a safeguard to be put in place to absorb the kombatants' insatiable bloodlust. In an enormous crater in Edenia, these warriors clashed in a single battle royale between the Forces of Light and Darkness that would threaten to rip apart reality and bring about the Apocalypse. Without warning, a mysterious pyramid rises from the ground, and the tip bursts into flames, attracting the warriors' curiosity to see what it was. The kombatants fought one another to get to the top, while Blaze, the gods' firespawn revealed himself to them. The firespawn was created by Delia, a powerful Edenian sorceress, and the mother of the main character in "Konquest" mode to destroy each fighter that would threaten him in order to save the realms from Armageddon. This would be the warriors' last battle, their last chance to prove that they are worthy of surviving, while many others will die. This will be the final battle for Mortal Kombat, the battle that will determine the fate of the realms.

The PlayStation 2 and Xbox versions of Armageddon contain 62 fighters (as well as two extra slots for user created characters), the most of any Mortal Kombat or tournament fighter game to date. Only two characters, Daegon and Taven, are new to the series, while Sareena makes her playable debut on non-portable consoles and Meat makes his debut as a legitimate character. The Wii version contains all the original characters from the other versions, as well as exclusive character Khameleon from the Nintendo 64 version of Mortal Kombat Trilogy, totaling the roster to 63.

Each character possesses two fighting styles (instead of the three previously available in "Deadly Alliance" and "Deception"), one hand-to-hand and one weapon.[3] Some of the larger bosses, like Onaga, have only one fighting style available (which does not show up, unless you check the characters movelist).[4] Other characters, such as Smoke and Mokap, do not have a weapon style, but a second unarmed style.

Also new to the series is the ability to create a Fatality. These custom fatalities are a constant series of commands that players input until the Fatality ends. This method of performing Fatalities replaces the character-specific Fatalities of previous Mortal Kombat games, where gamers would simply enter one input and view the Fatality cinematically. As the player adds each input, less time is allowed for further inputs and some moves cannot be repeated. There are eleven levels that can be achieved with Kreate a Fatality, lowest being a basic Fatality to the highest being an "Ultimate Fatality". The greater the number of inputs for the fatality, the more amount of koins is gained.

The Konquest mode in Armageddon is a combination of the same mode seen in Deception with elements borrowed from the spin-off adventure title Mortal Kombat: Shaolin Monks. The storyline centers on Taven and Daegon, two brothers who were put in suspended animation because their mother, known as Delia (a sorceress), and their father, Argus (the Edenian protector god), foresaw a cataclysmic event brought about by the Mortal Kombat fighters. Their awakening leads into the Konquest mode, which in turn leads into the game's standard play.

Taven is the main hero that the player controls in Konquest, while Daegon, his brother, is the primary antagonist, plotting with villains such as Shinnok and the Red Dragon Clan to destroy his brother and destroy Blaze to attain total godhood. Certain weapons are available at times in Konquest mode, which appear to handle very much like those found in Shaolin Monks. Various relics can be collected, one for each Kombatant (except Taven, Chameleon, the two fighters that the player can create in the PS2 version, and additionally Khameleon in the Wii version), throughout this mode.[5] Konquest unlocks characters' alternate costumes and other rewards in the rest of the game, while successfully completing the Konquest entirely will unlock Taven for arcade play. Meat, Daegon, and Blaze can be unlocked by collecting enough relics. 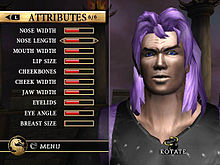 In addition to the choice of over sixty characters, Armageddon gives players the ability to design and use new fighters in the game.

From the number of options, there are potentially thousands of different combinations available. During production, the game offered at least fourteen different character classes,[6] which include humans, Tarkatans, Mercenaries, Black Dragon Members, Ninjas, Retro Ninjas, Geisha Assassins, etc.[7] However, after the game's release, only one preset was available to the two genders, Sorcerer to Male, and Tarkatan to Female. Although the clothing of each class is still available, it must be individually unlocked, and cannot be preset. All these presets can be unlocked by unlocking each piece of clothing that makes up that class. The preset will then appear under the preset menu.

Players can give their character a unique fighting style, by changing their stance/win pose animation and assigning different (already named) attacks to the buttons on their controller. There is a range of swords and axes (the only weapons available) and special moves to choose from. Most moves and costume items need to be purchased with coins earned in the game's other modes, though some moves and items are available for free from the beginning.

The fighters can also be given their own storyline. If a player uses their creation to finish a single player game, they will see the ending that the player designed for them, although the ending will cut off after roughly twelve lines or if the last line consists of one word.[8] They could also be used in multiplayer games and online, using the PlayStation 2's online capability or Xbox Live, although the online service for both versions has been since terminated. The ending that the game shows is the same text that the player inputs as the fighter's biography.

Mortal Kombat: Armageddon's mini-game is named "Motor Kombat". True to the name, Ed Boon compares it to Mario Kart in the September 2006 issue of Official Xbox Magazine. Each of the characters has a customized go-kart, as well as their own special moves. The Motor Kombat characters keeps their cartoonish "super deformed" style that was introduced in Deception's Puzzle Kombat mode. It also includes style-based fatalities for characters, and deathtraps. The cars are based on the characters' look and personality - for instance, Baraka's car has blades on the front bumper as a homage to Baraka's Blades and Scorpion's Car is powered by a skull breathing fire as a homage to his Toasty Fatality

Motor Kombat features online play, as well as off-line support for up to four players (two players in PS2 version) with a split-screen display. In the game, players can knock their opponents into various deathtraps on the courses, like rolling pins stones, crushers, slippery snow caves filled with stalagmites and endless pits. The character roster for Motor Kombat is Scorpion, Sub-Zero, Bo' Rai Cho, Jax, Baraka, Raiden, Kitana, Mileena, Cyrax and Johnny Cage.

Armageddon contains every single fighter from the six main fighting game installments of the franchise and their upgrades, not counting the adventure games like Special Forces and Shaolin Monks. Khameleon, a secret character from the Nintendo 64 version of Mortal Kombat Trilogy (not to be confused with the male Chameleon) was absent from the PlayStation 2 and Xbox version of Armageddon. Due to fan demand, she was added to the character roster of the Wii version of the game.[9]

The Krypt in Armageddon features an unused concept video for Ermac's bio, which caused rumors to circulate that bios had been created for the game but weren't included due to time constraints. However, Midway, through fansite Mortal Kombat Online, confirmed that no bios had been created.[10] A month later, in a chat event held by Mortal Kombat Online, Ed Boon confirmed that bios would be made available on the Armageddon website.[11] Kenshi's bio was the first to be released, on December 21, 2006, and other bios have been made available since then.[12][13] As of October 15, a moderator on the Midway forums confirmed that the remaining Armageddon bios were canceled so the MK Team can move further along in the development of Mortal Kombat 8 which would eventually become Mortal Kombat vs. DC Universe.[14]

There are 4 different limited editions featuring the following content: a 60-minute bonus DVD with a History of Fatalities movie and new videos for more than 50 characters, an animation cell of the cover art autographed by creator Ed Boon, and also an arcade-perfect version of Ultimate Mortal Kombat 3 included in the main disc. The limited editions are only available on the PS2. Several limited edition versions of the game have different metallic covers exclusive to certain stores featuring different character sets or the Mortal Kombat dragon emblem. The Wii version of Armageddon has a new motion-based control system, along with playability on the Classic Controller and a GameCube controller. It also has a new Endurance Mode, a Wii Remote Training Mode, new menu screens, and Khameleon as a playable character; however, this version does not have online features.

Reception for Mortal Kombat: Armageddon has been generally favorable with an average critic rating of 78% for the PS2,[24] 79% for the Xbox,[24] and 72% for the Wii at GameRankings.[24] The game was notably praised for including a complete character roster. IGN stated, "The inclusion of 62 total warriors is a massive achievement,"[15] while Game Informer said, "Nothing really comes close to what Midway has thrown together here."[19] GameSpot praised the Konquest mode, "which was such a low point of MK: Deception, is one of the relative strengths of MK: Armageddon."[17]

Reception to the Kreate-A-Fatality feature was mixed. While GameSpot called it "a disappointing replacement to the classics," IGN noted not having set fatalities adds variety to gameplay. The reception to the Kreate-A-Fighter mode was also mixed, where some noted limitations yet with others like GameSpy saying they "haven't seen a character creation tool this robust since City of Heroes."[25]

The game's engine was criticized for being built entirely upon that of the previous 3-D Mortal Kombat titles. PSM went as far as saying the system was not innovative. While many of the gameplay flaws in MK: Deception have been fixed (lack of a wake-up game that allows 50/50 attacks upon knocking down an opponent, and the slow jumping system, which prevents players from jumping over most projectiles, infinite combos), new glitches arise with the new Air Kombat and Parry systems. Eurogamer noted that despite the large choice of characters, "much of this number is made up by the huge number of clone characters" and that "so many characters look and play alike."[23]

The game won the award for Best Fighting Game at the Spike Video Game Awards in 2006.[26] IGN named it as the Best PS2 Fighting Game.[27] The journal Official Xbox Magazine put Armageddon as the "Xbox Game of the Year" during an issue from 2006. Gaming Target put the game in its "52 Games We'll Still Be Playing From 2006" selection.[28]

As well as it's counter part Mortal Kombat: Deception, Armageddon was not played at big name tournaments like Evolution Championship Series but was played at many local tournaments, and still seems to have a cult following of sorts. Pakistan also held a tournament for Armageddon that was the biggest Tournament the country had ever seen.