The Delhi Territory was an administrative region in British India which comprised the present districts of Gurgaon, Delhi, Rohtak, Hissar, tahsil panipat and pargana Karnal in the Karnal District.

After the Multiny, the Delhi division of the North-Western Provinces was transferred to the Punjab in 1858, and formed into the Delhi and Hissar divisions, which embraced the six districts of Delhi, Gurgaon, Panipat, Rohtak, Hissar and Sirsa.[1] 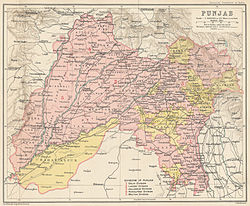