Delhi Public Library is a national depository library in Delhi, India, it has over 35 branches across the state.

The one of the branches of the library is located on S.P. Mukherjee Marg, opposite the Old Delhi Railway Station. 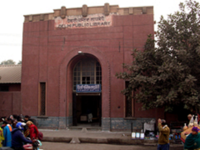 The Library was established in 1951 as a pilot project sponsored by UNESCO and the Government of India. The library project dates back to 1944,when Shri Ramkrishna Dalmia donated most of the amount required to construct a library building at the request of Gen. Sir Claude Auchinleck. In February 1950 the Indian government and UNESCO agreed to initiate the project, and the library was officially opened on 27 October 1951, by then Prime minister Jawaharlal Nehru. The library buildings were acquired between 1951 and 1953, with operations formally transferred from UNESCO to the Indian Government in 1955. The library provides training facilities to student librarians and social eduction workers from its early days[1].

As a depository library it receives a copy of all books, newspapers and periodicals published in India. The users are free to use the library and books upon one time subscription. The library has a network of branches in Delhi as well as mobile branches with following free to use facilities upon refundable security deposit[2][3]