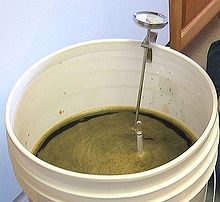 Beer measurement is the means of assessing beer by bitterness, by strength and by colour.

"Degrees Lovibond" or "°L" scale is a measure of the colour of a substance, usually beer, whiskey, or sugar solutions. The Standard Reference Method (SRM) and EBC method have largely replaced it, with the SRM giving results approximately equal to the °L. The determination of the degrees lovibond takes place by comparing the color of the substance to a series of amber to brown glass slides, usually by a colorimeter. The scale was devised by Joseph Williams Lovibond.[1]

The Standard Reference Method or SRM [2] is a system modern brewers use to measure colour intensity, roughly darkness (but see Tristimulus Color below), of a beer or wort. The method involves the use of a spectrophotometer or photometer to measure the attenuation of light of a particular wavelength, 430 nanometers, as it passes through a sample contained in a cuvette located in the light path of the instrument.

The "Plato scale" is an empirically derived hydrometer scale to measure density of beer wort in terms of percentage of extract by weight. The scale expresses the density as the percentage of sucrose by weight, so a wort measured at 12° Plato has the same density as a water−sucrose solution containing 12% sucrose by weight, denoted as 12% Brix. It was developed in 1843 by Bohemian scientist Karl Balling as well as Simon Ack, and improved by German Fritz Plato. For the brewer, it has an advantage over specific gravity in that it expresses the measurement in terms of the amount of fermentable materials. Degrees Plato are more popular in central European brewing, and occasionally feature in beer names—some Slovak or Czech breweries feature 10° and 12° versions of their beers, for instance.

The relationship between degrees Plato and specific gravity (SG) is not linear, but a good approximation is that 1° Plato equals four “brewer’s points” (4 x .001); thus 12° Plato corresponds to an SG of 1.048 (12 x 4 x. 001). Gravity refers to the specific gravity of the wort or must at various stages in the fermentation. This article focuses primarily on the brewing industry. The concepts and equations are basically the same in the wine making industry.

At various stages in alcohol fermentation, the density of the wort varies. Depending upon the depth that the hydrometer falls into the wort, the percentage of alcohol can be determined. Initially (before alcohol production by the yeast commences) the specific gravity of a wort is dependent mostly on the amount of sugar present and, therefore, specific gravity readings can be used to determine sugar content by the use of formulae or tables. This sugar content is expressed in units of grams of sugar per 100 grams of wort equivalent to % w/w and called, in the brewing industry, "degrees Plato" (abbreviated °P) and in the wine industry "degrees Brix". Even when specified in terms of °P it is not uncommon to refer to the pre-fermentation reading as the "Original Gravity", (abbreviated OG) though it is more correct to term it the "Original Extract" (abbreviated OE). It is, of course, correct to refer to the original specific gravity reading as the OG. By considering the original sugar content the brewer or vintner obtains an indication as to the probable ultimate alcoholic content of his product. The OE is often referred to as the "size" of the beer and is, in Europe, often printed on the label as Stammwürze or sometimes just as a percent. In the Czech Republic, for example, they speak of "10 degree beers", "12 degree beers" and so on.

As fermentation progresses the yeast convert sugars to carbon dioxide, ethanol, more yeast and flavor producing compounds. The decline in the sugar content and the presence of ethanol (which is appreciably less dense than water) both contribute to a lowering in the specific gravity of the wort so that the formulae relating sugar content and specific gravity no longer apply. Nevertheless, by monitoring the decline in SG over time the brewer obtains information about the health and progress of the fermentation and determines that it is complete when gravity stops declining. A gravity measurement taken at this time compared to the original gravity reading can be used to estimate the amount of sugar consumed and thus the amount of ethanol produced. Specific gravity is measured by a hydrometer, pycnometer or oscillating U-tube electronic meter.

Gravity measurements are used to determine the "size" of the beer, its alcoholic strength and how much of the available sugar the yeast were able to consume (a given strain can be expected, under proper conditions, to ferment a wort of a particular composition to within a range of attenuation, that is, they should be able to consume a known percentage of the extract).

Alcohol by volume (abbreviated as abv or ABV) is a standard measure of how much alcohol (ethanol) is contained in an alcoholic beverage (expressed as a percentage of total volume).[3][4][5] The abv standard is used worldwide.[6]

In some countries, alcohol by volume is referred to as degrees Gay-Lussac (after the French chemist Joseph Louis Gay-Lussac).[7]

The letter "X" is used on some beers, and is thought to mark beer strength, with the more Xs the greater the strength.[8][9]

European Bitterness Units scale, often abbreviated as EBU, is a scale for measuring the perceived bitterness of beer[10], with lower values being generally "less bitter" and higher values "more bitter". The scale and method are defined by the European Brewery Convention, and the numerical value should be the same as of the International Bitterness Units scale (IBU), defined in co-operation with the American Society of Brewing Chemists.[11] However, the exact process of determining EBU and IBU values differs slightly, which may in theory result with slightly smaller values for EBU than IBU.[12]

The European Brewery Convention also defines units for the colour of beer, for which the abbreviation EBC is used. This should not be confused with the bitterness units.

The International Bittering Units scale, or simply IBU scale, provides a measure of the bitterness of beer, which is provided by the hops used during brewing. Bittering units are measured through the use of a spectrophotometer and solvent extraction. [13]

This technique was adopted at the same time as another method based on measuring the concentration (in milligrams per liter; parts per million w/v) of isomerized α acids in a beer, causing some confusion among small-scale brewers.[14] The American Society of Brewing Chemists, in the introduction to its methods on measuring bitterness, points out some differences between the results of the two methods:

While the results of the IAA [isomerized α acids] methods are practically identical to those obtained by the [I]BU method for beer brewed with fresh hops, the IAAs of beer brewed with old or poorly stored hops, and with certain special hop extracts, can be significantly lower than the [I]BU figure.[13]

The bittering effect is less noticeable in beers with a high quantity of malt, so a higher IBU is needed in heavier beers to balance the flavor. For example, an Imperial Stout may have an IBU of 50, but will taste less bitter than an English Bitter with an IBU of 30, because the latter beer uses much less malt than the former. The technical limit for IBU's is around 100; some have tried to surpass this number, but there is no real gauge after 100 IBUs when it comes to taste threshold. Light lagers without much bitterness will generally have 5 IBUs, while an India Pale Ale may have 100 IBUs or more.[15]