The meaning of 'deficit' differs from that of 'debt', which is an accumulation of yearly deficits. Deficits occur when a government's expenditures exceed the revenue that it generates. The deficit can be measured with or without including the interest payments on the debt as expenditures. The primary deficit is defined as the difference between current government spending on goods and services and total current revenue from all types of taxes net of transfer payments. The total deficit (which is often called the fiscal deficit or just the 'deficit') is the primary deficit plus interest payments on the debt.[1]

Therefore, if t is a timeframe, Gt is government spending and Tt is tax revenue for the respective timeframe, then the primary deficit is

If Dt − 1 is last year's debt, and r is the interest rate, then the total deficit is

Economic trends can influence the growth or shrinkage of fiscal deficits in several ways. Increased levels of economic activity generally lead to higher tax revenues, while government expenditures often increase during economic downturns because of higher outlays for social insurance programs such as unemployment benefits. Changes in tax rates, tax enforcement policies, levels of social benefits, and other government policy decisions can also have major effects on public debt. For some countries, such as Norway, Russia, and members of the Organization of Petroleum Exporting Countries (OPEC), oil and gas receipts play a major role in public finances.

A government deficit can be thought of as consisting of two elements, structural and cyclical.

At the lowest point in the business cycle, there is a high level of unemployment. This means that tax revenues are low and expenditure (e.g. on social security) high. Conversely, at the peak of the cycle, unemployment is low, increasing tax revenue and decreasing social security spending. The additional borrowing required at the low point of the cycle is the cyclical deficit. By definition, the cyclical deficit will be entirely repaid by a cyclical surplus at the peak of the cycle.

Some economists have criticized the distinction between cyclical and structural deficits, contending that the business cycle is too difficult to measure to make cyclical analysis worthwhile.

The fiscal gap, a measure proposed by economists Alan Auerbach and Laurence Kotlikoff, measures the difference between government spending and revenues over the very long term, typically as a percentage of Gross Domestic Product. The fiscal gap can be interpreted as the percentage increase in revenues or reduction of expenditures necessary to balance spending and revenues in the long run. For example, a fiscal gap of 5% could be eliminated by an immediate and permanent 5% increase in taxes or cut in spending or some combination of both.[2] It includes not only the structural deficit at a given point in time, but also the difference between promised future government commitments, such as health and retirement spending, and planned future tax revenues. Since the elderly population is growing much faster than the young population in many countries, many economists argue that these countries have important fiscal gaps, beyond what can be seen from their deficits alone. 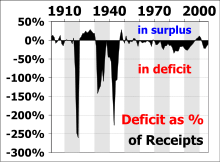 Before the invention of bonds, the deficit could only be financed with loans from private investors or other countries. A prominent example of this was the Rothschild dynasty in the late 18th and 19th century, though there were many earlier examples.

These loans became popular when private financiers had amassed enough capital to provide them, and when governments were no longer able to simply print money, with consequent inflation, to finance their spending.

However, large long-term loans had a high element of risk for the lender and consequently gave high interest rates. Governments later began to issue bonds that were payable to the bearer, rather than the original purchaser. This meant that someone who lent the state money could sell on the debt to someone else, reducing the risks involved and reducing the overall interest rates. Examples of this are British Consols and American Treasury bill bonds.

According to some economists, during recessions, the government can stimulate the economy by intentionally running a deficit.

If a reduction in a structural deficit is desired, either revenue must increase, spending must decrease, or both. Taxes may be increased for everyone/every entity across the board or lawmakers may decide to assign that tax burden to specific groups of people (higher-income individuals, businesses, etc.). Lawmakers may also decide to cut government spending. Like with taxes, they could decide to cut the budgets every government agency/entity by the same percentage or they may decide to give a greater budget cut to specific agencies. Many, if not all, of these decisions made by lawmakers are based on political ideology, popularity with their electorate, or popularity with their donors.

Similar to increasing taxes, changes can be made to the tax code that increases tax revenue. Closing tax loopholes and allowing fewer deductions are different from the act of increasing taxes but essentially have the same effect.