The Defence Animal Centre (DAC) is a training centre, based in Melton Mowbray, east Leicestershire, that trains animals (mainly dogs) for all three armed forces. It is also home of the Royal Army Veterinary Corps. The DAC now comes under command of the Royal School of Military Engineering.

The Army moved in in 1946. RAF Police dogs began to be trained at the Centre from 1994, after merging RAF and Army dog training in April 1991. The Centre is run by Chorley-based Glendale Facilities Management. It was managed by Realm from 2000 under a PFI contract. The Army School of Equitation's indoor riding school was opened by Princess Anne on 28 February 2008. It used to be a defence agency until March 1999, when it became part of the Army Training and Recruiting Agency (ATRA), in the Adjutant General's Corps Training Group, in April 1999. In 2002, a new £10m building opened at the Centre. 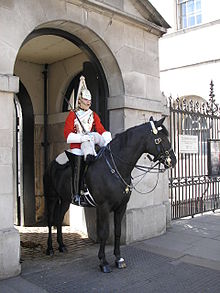 The dogs, often springer spaniels, are mainly trained as sniffer dogs to detect drugs and bombs. Substances the dogs are trained to detect include TNT, Cordtex, C-4 and Semtex.

It trains about 300 dogs a year, taking about four to six months to train. Most dogs are donated by the general public. The Services Veterinary Hospital looks after the health of all the dogs (Canine Division) and horses (Equine Division) of the UK armed forces (mainly the British Army).

The site has been chosen as a training ground for the 2012 Olympics for cycling and equestrian events.

In the field, some military (and police) dogs can be fitted with special bullet-proof vests to protect them.

At the Centre is a School of Farriery (training to repair horseshoes), recognised by the Worshipful Company of Farriers and Farriers Registered Council. International farrier competitions are held at the Centre annually. 140 horses can be stabled at the Centre, with 260 out at grass in 240 acres (0.97 km2) of grazing. 250 dogs can be housed on the main site.