Defence & Strategic Studies (DSS) is a department in the Quaid-i-Azam University; Islamabad. It is the only civil-military educational institute in Pakistan that deals with the study of defence and strategy. 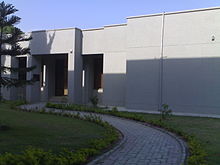 The department was founded in 1980 by the scholar Dr. Pervaiz Iqbal Cheema, former Chairperson of the Department of International Relations (IR), QAU, and President of the Islamabad Peace Research Institute. Because of Dr Cheema's previous close association with the IR department the department of DSS is considered as extension and brain child of IR department. However, since its inception the two departments have been rivals. Former students are employee with various organizations in Pakistan.

The Department offers M.Sc, MPhil & PH.d degrees to both civilians & military personnel. M.Phil programs started in 1998-1999 and PhD programme was first advertised for HEC-qualified candidates as well as the general public in December 2004. The Department now offers admission in M.Sc, M.Phil and Ph.D programmes twice a year on the basis of a semester system.

MSc & MPhil are based on 2 year programs (4 semesters).

The academic training imparted by the Department's degree program is geared towards the development of requisite academic knowledge, analytical ability for evaluation of national, regional and international strategic environments and policies.

The Pakistan armed forces form a small but significant representation in as well as for the department. Professional soldiers join as students and also as teachers. The presence of armed forces personnel provides better understanding of military affairs to the civilian students while the civilian presence redirects minds of military personnel to civil & political affairs. The Department Faculty, in addition to its regular teaching, contributes research articles to various professional journals and delivers lectures at the National Defense University, Foreign Services Academy, Joint Services Staff College Islamabad and Staff College Quetta.

Some of the faculty members include:

Seminar on Contemporary Issues in Defense and Strategic Studies:

The department arranges two forms of seminars. One is by guest scholars, experts, military personnel & other professionals on weekly basis, while the other is conducted by students of MSc program at the end of their final semesters where each student has to submit his/her thesis paper & give presentations.

Some of the seminars made by scholars, experts, military personnel & other professionals include (1999-2000 list):

The Department organized an International Conference on "Peace and Security in South Asia After India Pakistan Nuclear Tests" in collaboration with Hains Siedel Stiftung (Germany) December 3-05, 1998

In addition, students are encouraged to attend seminars in other departments of QAU as well as other universities & research institutes.