Beijing Capital Airlines (Chinese: 首都航空​), a subsidiary of Hainan Airlines, is an airline based in the People's Republic of China. 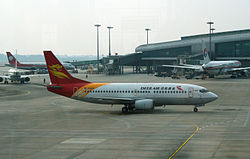 The company was established in 1995 as Deer Jet Airlines (Chinese: 金鹿航空). In 1998, it began offering international services under the Deer Air branding. In October 2007, it received its first Airbus A319 and began returning the formerly operated Boeing 737s. Deer Jet began providing charter services in December 2008 using a fleet of A319s and corporate jets. The airline was authorized by the Civil Aviation Administration of China to operate scheduled air services in 2009.

Deer Jet Airlines was divided into two companies on May 4, 2010. While the charter operation has kept the Deer Jet branding, scheduled operations using Airbus aircraft were renamed Beijing Capital Airlines.[1][2][3]

As of March 2011, the Beijing Capital Airlines fleet consists of the following aircraft with an average age of 2.6 years, all of which are leased from Hainan Airlines:[4]

The fleet of corporate jet aircraft, operating under the Deer Jet brand, includes:[4]