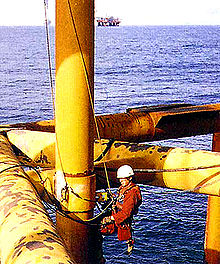 Offshore oil spill prevention and response is the study and practice of reducing the number of offshore incidents that release oil or hazardous substances into the environment and limiting the amount released during those incidents.[1][2][3]

Important aspects of prevention include technological assessment of equipment and procedures, and protocols for training, inspection, and contingency plans for the avoidance, control, and shutdown of offshore operations. Response includes technological assessment of equipment and procedures for cleaning up oil spills, and protocols for the detection, monitoring, containment, and removal of oil spills, and the restoration of affected wildlife and habitat.[4]

In the United States, offshore oil spill prevention contingency plans and emergency response plans are federally mandated requirements for all offshore oil facilities in U.S. Federal waters.[5] Currently administered by the Minerals Management Service (MMS), these regulatory functions were ordered on May 19, 2010 to be transferred to the United States Department of the Interior's newly-created Bureau of Safety and Environmental Enforcement.[6] Oil spills in inland waters are the responsibility of the Environmental Protection Agency (EPA), while oil spills in coastal waters and deepwater ports are the responsibility of the U.S. Coast Guard.[7]

Unlike the Best Available Technology (BAT) criteria stipulated by the Clean Air Act and the Clean Water Act, the Outer Continental Shelf Lands Act amendments of 1978 stipulated that offshore drilling and oil spill response practices incorporate the use of Best Available and Safest Technologies (BAST).[8] [9] While the Technology Assessment and Research (TAR) Program is tasked with research and development of such technologies through contract projects, human factors are also highly relevant in preventing oil spills. As William Cook, former chief of the Performance and Safety Branch of Offshore Minerals Management for the MMS, expressed it: "Technology is not enough. Sooner or later, it comes face to face with a human being. What that human being does or does not do, often ensures that the technology works as it was intended--or does not. Technology -- in particular -- new, innovative, cutting edge technology must be integrated with human and organizational factors (HOF) into a system safety management approach." [10]

Hydrocarbon producing wells are designed and managed on the basis of the 'barriers' in place to maintain containment. A 'dual barrier' philosophy is typically used whereby two independently verified barriers to the hydrocarbon reservoir and the environment are required at all times. The failure of a single barrier would not lead to a hydrocarbon release. During the different phases of drilling, production, workover and abandonments, many different pieces of equipment will be used to maintain control of the well fluids and pressures. 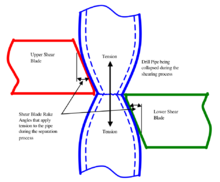 Figure 2. In a shear ram, the two blades are driven hydraulically to cut the thick steel drill pipe. 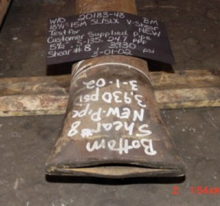 The primary safety control devices for well drilling are blowout preventers (BOPs), which have been used for nearly a century in control of oil well drilling on land. The BOP equipment technology has been adapted and used in offshore wells since the 1960s. The inspection and repair of subsea BOPs are much more costly, and the consequences of failure potentially much worse. There are two variations of offshore BOP in use; the sub-sea blowout preventer which sits on the ocean floor, and the surface blowout preventer which sits between the riser pipe and the drilling platform. The surface unit is smaller, lighter, less costly, and more easily accessed for routine tests and maintenance. However, it does not prevent blowouts involving a broken riser pipe.[11]

Blowout preventers often contain a stack of independently-operated cutoff mechanisms, so there is redundancy in case of failure, and the ability to work in all normal circumstances with the drill pipe in or out of the wellbore. The BOP used in the Deepwater Horizon, for example, had five "rams" and two "annular" blowout preventers.[12] The rams were of two types: "pipe rams" and "shear rams". If the drill pipe is in the well, the pipe rams slide perpendicular to the pipe, closing around it to form a tight seal. The annular preventers also close around the pipe, but have more of a vertical motion, so they loosen slightly if the drill pipe is being pushed downward, as might be necessary in a "snubbing" or "well kill" operation.[13] Shear rams may be used as a last resort[14] to cut through the drill pipe and shut off everything, including whatever might be coming up inside the drill pipe.

Studies done for the Minerals Management Service have questioned the reliability of shear rams in deepwater drilling. Figure 1 shows the result of a 2002 study on offshore oil rigs. This study was designed to answer the question “Can a given rig’s BOP equipment shear the pipe to be used in a given drilling program at the most demanding condition to be expected?”[15] Seven of the fourteen cases in this study opted not to test, another had insufficient data to draw a definitive conclusion, and three failed to shear the pipe under realistic conditions of expected well bore and seawater pressure. In each case of failure, increasing the pressure on the rams above its design value, successfully sheared the pipe.[15] A follow-up study in 2004 confirmed these results with a much larger sample of drill pipes and typical blowout preventers from three different manufacturers.[14]

In addition to insufficient ram pressure, a New York Times investigation of the Deepwater Horizon oil spill listed other problem areas for deepwater blowout preventers. If one of the threaded joints between pipe sections is positioned within a shear ram, the ram would probably not cut through it, because the joints are "nearly indestructable".[16] Requiring two shear rams in every blowout preventer may help to avoid this problem and to avoid some types of "single-point failure".[16] Other technologies that might improve the reliability of BOPs include backup systems for sending commands to the BOP and more powerful submersibles that connect to the BOP's hydraulics system.[16] 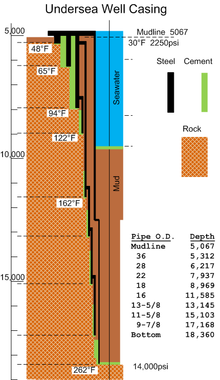 Casing of offshore oil wells is done with a set of nested steel pipes, cemented to the rock walls of the borehole as in Figure 4. Each section is suspended by a threaded adapter inside the bottom end of the section above.[17] Failure of either the casings or the cement can lead to injection of oil into groundwater layers, flow to the surface far from the well, or a blowout at the wellheaad.[18] [19] [20]

To ensure that the cement forms a strong, continuous, 360-degree seal between the casing and the borehole, "centralizers"[13] are placed around the casing sections before they are lowered into the borehole. Cement is then injected in the space between the bottom of the new casing section and the bottom of the borehole. The cement flows up around the outside of the casing, replacing the mud in that space with pure, uncontaminated cement. Then the cement is held perfectly still for several hours while it solidifies.[17]

Without centralizers, there is a high risk that a channel of drilling mud or contaminated cement will be left where the casing contacts the borehole. These channels can provide a path for a later blowout. Even a thin crack can be pushed open by the enormous pressure of oil from below. Then erosion of the cement can occur from high-velocity sand particles in the oil. A hairline crack can thus become a wide-open gushing channel.[21]

Another cause of cement failure is not waiting long enough for the cement to solidify. This can be the result of a rushed drilling schedule, or it could happen if there is a leak causing the cement to creep during the time it is supposed to be setting. A "cement evaluation log"[13] can be run after each cement job to provide a detailed, 360-degree check of the integrity of the entire seal. Sometimes these logs are skipped due to schedule pressures.

Cement is also used to form permanent barriers in the annulus outside the production liner, and temporary barriers inside the liner. The temporary barriers are used to "shut in" the well after drilling and before the start of production. Figure 4 shows a barrier being tested by replacing the heavy mud above it with lighter seawater. If the cement plug is able to contain the pressure from the mud below, there will be no upward flow of seawater, and it can be replaced with mud for the final shut in.

There are no cement barriers in the annulus in Figure 4. While there is no requirement for such barriers, adding them can minimize the risk of a blowout through a direct wide-open channel from the reservoir to the surface.[22]