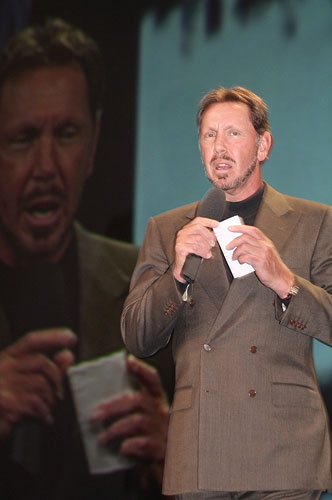 Lawrence Joseph "Larry" Ellison (born , ) is an American entrepreneur and the co-founder and of , a major company. He is currently listed on list of s as the #14 richest person in the world as of August 29, 2008. [ [http://www.forbes.com/lists/2008/10/billionaires08_Lawrence-Ellison_JKEX.html #14 Lawrence Ellison - Forbes.com ] ]

Larry Ellison was born in the to Florence Spellman, a 19-year-old unwed Jewish mother. At his mother's request, he was given to his mother's aunt and uncle in Chicago to raise. Lillian Spellman Ellison and Louis Ellison adopted him when he was nine months old. Ellison did not learn the name of his mother or meet her until he was 48; the identity of his father is unknown.

The home was a two-bedroom in Chicago's South Shore neighborhood, populated mostly with s. Ellison remembers his adoptive mother as warm and loving, in contrast to his austere, unsupportive, and often distant adoptive father, a n from the who adopted the name Ellison to honor his point of entry into the USA, , as well as to conceal his Jewish ancestry. Louis was a modest government employee who had made a small fortune in Chicago real estate, only to lose it during the .

Ellison was a bright but inattentive student. He left the at the end of his second year, after not taking his final exams because his adoptive mother had just died. After spending a summer in where he lived with his friend Chuck Weiss, he attended the for one term, where he first encountered computer designing. At 20 years of age, he moved to northern California permanently.

During the 1970s, Ellison worked for Ampex Corporation. One of his projects was a for the , which he named "Oracle".

Ellison was inspired by the paper written by on relational database systems named "A Relational Model of Data for Large Shared Data Banks." He founded Oracle in 1977, putting up a mere $2000 of his own money, under the name "Software Development Laboratories" (SDL). In 1979, the company was renamed "Relational Software Inc.", later renamed "Oracle" after the flagship product . He had heard about the IBM database, also based on Codd's theories, and wanted Oracle to be compatible with it, but IBM made this impossible by refusing to share System R's code. The initial release of Oracle was Oracle 2; there was no Oracle 1. The release number was intended to imply that all of the bugs had been worked out of an earlier version.

In 1990, Oracle laid off 10% (about 400 people) of its work force because of a mismatch between cash and revenues. This crisis, which almost resulted in Oracle's bankruptcy, came about because of Oracle's "up-front" marketing strategy, in which sales people urged potential customers to buy the largest possible amount of software all at once. The sales people then booked the value of future license sales in the current quarter, thereby increasing their bonuses. This became a problem when the future sales subsequently failed to materialize. Oracle eventually had to restate its earnings twice, and also to settle out of court lawsuits arising from its having overstated its earnings. Ellison would later say that Oracle had made "an incredible business mistake."

Although IBM dominated the mainframe relational database market with its DB2 and SQL/DS database products, it delayed entering the market for a relational database on UNIX and Windows operating systems. This left the door open for Sybase, Oracle, and Informix (and eventually Microsoft) to dominate mid-range and microcomputers.

Around this time, Oracle fell behind . In 1990-1993, Sybase was the fastest growing database company and the database industry's darling vendor, but soon fell victim to its . Sybase's 1993 merger with Powersoft resulted in a loss of focus on its core database technology. In 1993, Sybase sold the rights to its database software running under the Windows operating system to , which now markets it under the name "SQL Server."

In 1994, Software overtook Sybase and became Oracle's most important rival. The intense war between Informix CEO and Ellison was front page Silicon Valley news for three years. Ultimately, Oracle defeated Informix in 1997. In the same year, Ellison was made a director of after came back to the company. Ellison resigned in 2002, saying that he did not have the time to attend necessary formal board meetings. In November 2005, a book detailing the war between Oracle and Informix was published. " [http://www.storyofinformix.com The Real Story of Informix Software and Phil White] " provides a detailed chronology of the battle of Informix against Oracle, and how Informix Software's CEO Phil White landed in jail because of his obsession to overtake Ellison.

Once Informix and Sybase were defeated, Oracle enjoyed years of industry dominance until the rise of Microsoft's in the late 90s and IBM's acquisition of Informix Software in 2001 to complement their DB2 database. Today Oracle's main competition for new database licenses on UNIX, Linux, and Windows operating systems is with IBM's DB2, the open source database MySQL (bought by Sun in 2008), and with Microsoft SQL Server (which only runs on Windows). IBM's DB2 still dominates the mainframe database market.

Being one of the world's wealthiest persons, Ellison is known for his extravagant lifestyle.

Ellison is the second largest financier of , which unsuccessfully competed to be selected as the challenger for the on behalf of the of . was the Challenger of Record for the in Valencia, until eliminated from the challenger selection series in the semi-finals. Oracle Corporation does not provide any financial support to but grants permission for use of its logo and branding.

Oracle Racing also participated in the challenger selection series for the 2003 but was defeated in the final of the 2003 .

Ellison won the 1998 in his yacht "Sayonara". A storm that broke out during the race cost 6 sailors (none from the Sayonara) their lives, an experience that led Ellison to swear off personal participation in ocean racing.

Ellison owns many exotic cars including an and a among others. His favorite is the , which he was known to give as gifts each year during its production. [ [http://www.bonniepowell.com/ellison.html Being Larry Ellison] ]

Ellison is a certified pilot and has owned several unusual aircraft, including fighter jets. Ellison has been cited several times by the City of San Jose, California for violating its limits on late night takeoffs and landings from San Jose Mineta International Airport by planes weighing more than 75&thinsp;000 pounds (34&thinsp;019 kg).Fact|date=May 2008 San Jose granted him a personal waiver from these regulations in 2001.Fact|date=May 2008

Ellison styled his estimated $200 million estate after feudal Japanese architecture, complete with a man-made convert|2.3|acre|m2|sing=on lake and the most extensive available with current technology (coord|37|24|44.34|N|122|14|51.40|W). In 2004 and 2005, Ellison purchased more than 12 properties in worth more than $180 million. The $65 million Ellison spent on five contiguous lots on Malibu's Carbon Beach was the most costly residential transaction in United States history until sold his , compound for $70 million later that same year, according to industry writer Jeffrey Bellamar.Fact|date=March 2007 His entertainment system cost $1 million, and included a rock concert-sized video projector at one end of a drained swimming pool and turned the gaping hole into a giant subwoofer [ [http://www.wired.com/wired/archive/10.11/power_houses_pr.html Wired 10.11: Power Houses ] ] .

Ellison has been rebuffed in his attempts to buy the and the . He is now pursuing ownership of a potential future franchise in Los Angeles.

In order to settle an lawsuit arising from Ellison's selling nearly $1 billion of Oracle stock, he was allowed to donate $100 million to his own charitable foundation without admitting wrongdoing. A California judge refused to allow Oracle to pay Ellison's legal fees, amounting to $24 million. Ellison's lawyer had argued that were Ellison to pay those fees, that could be construed as an admission of guilt.

In response to the September 11th terrorist attacks, Ellison offered to donate to the Federal government software that would enable it to build and run a national identification database and issue ID cards. This offer sparked fierce debate in the media. [http://www.wired.com/news/conflict/0,2100,47788,00.html]

In 2002, the leadership of the stated that it believed Ellison would increase its annual budget from $35 million to $100 million.

The 2004 "" list of the charitable donations made by the wealthiest 400 Americans stated that Ellison had donated $151,092,103 in the preceding year, about 1% of his estimated personal wealth.

In June 2006, Ellison announced that he would not honor his earlier pledge of $115 million to , claiming it was due to the departure of former President .