Konpeki no Kantai (紺碧の艦隊?, lit. Deep Blue Fleet) is a Japanese alternate-history original video animation series produced by J.C.Staff. The series focuses on a technologically advanced Imperial Japanese Navy and a radically different World War II that was brought about by Admiral Isoroku Yamamoto's revival in the past due to unexplained circumstances. The series is also notable for using the Imperial Japanese calendar instead of the Roman calendar in denoting the years where the events of the series take place. It also spawned a 1997 OVA side story called Kyokujitsu no Kantai (旭日の艦隊?, lit. Fleet of the Rising Sun), one manga sequel, and two turn-based strategy games for the PC-FX and the SNES.

Konpeki no Kantai is largely based on the novel written by Yoshio Aramaki. The first volume of this series, Konpeki no Kantai (Deep Blue Fleet) was published in December 1990. The novel's popularity reportedly rose dramatically due to the start of the Gulf War the following month. Aramaki later wrote a different series called Asahi no Kantai (The Fleet of the Rising Sun), elements of which were used in the OVA sequel. The two series, totaling some 25 volumes, eventually sold more than five million copies.[1]

The title is a reference to the series' depiction of an advanced submarine force.

In Konpeki no Kantai's first episode, Admiral Isoroku Yamamoto's death on April 18, 1943, still proceeds exactly as in the real event. Just before his damaged plane crashes into Bougainville Island, Yamamoto blacks out, before awakening in a ship quarters. Unclear about what has just happened, Yamamoto speaks with a crewman, and discovers that he is aboard the Japanese cruiser Nisshin. He is then informed that the date is May 28, 1905 and that Battle of Tsushima has just ended. Yamamoto realizes that he has somehow been transported back in time (or to a parallel world).

After Yamamoto decides to revert to his old name of Isoroku Takano,[2] he vows to use his advance-knowledge of the next 38 years to ensure that Japan does not make the same mistakes as before.

Yamamoto's first priority is to spearhead a massive naval construction program. It involves building a large fleet of advanced battleships and supercarriers, nuclear submarines based on the design of the real-life I-400 Sen Toku submarine, and advanced combat aircraft that were in prototype or concept form during the late stages of the actual Pacific War.[3]

His plan for success begins with a coup d'état against the hardline government of Army General Hideki Tōjō in late 1941, on the eve of the Pearl Harbor attack, and installing an ally, Lt Gen Yasaburo Otaka as prime minister. Otaka, who has also been transported back in time, agrees to work with Yamamoto to change history and ensure that the Japanese Empire emerges victorious against the United States in the Second World War.

The first episode of the series depicts the Japanese attack on Pearl Harbor on December 7, 1941. In this alternate history, Yamamoto uses his advance knowledge of the future, combined with now superior technology of the Japanese navy, to ensure that the strategy and outcome of the attack are considerably different from the actual events which occurred:

Following the successful invasion, Japan uses Hawaii as its main north Pacific base. In subsequent episodes, the Japanese military easily defeats Allied forces in Southeast Asia and grants independence to all of the territories formerly under European and American colonial rule. In subsequent battles in the Tasman Sea and the Torres Strait, the IJN further cripples American naval power and advances across the Pacific Ocean to strike at the West Coast of North America. An IJN submarine-carrier flotilla destroys the Panama Canal's Gatun locks to hinder American efforts to transfer ships from the Atlantic Ocean. The United States suffers more crushing setbacks, including a second Panama Canal attack and a Japanese surgical airstrike on the Manhattan Project's Los Alamos facilities. They prove too much for US President Henry Roosevelt, who dies of a stroke after learning of Los Alamos' destruction. His successor, Bill Truman, realizing that the United States cannot continue the war, sues for peace and accepts the surrender terms offered by Japan.

Although the Japanese are initially allied with Nazi Germany, German dictator Heinrich von Hitler becomes concerned about their string of victories and the rapid growth of Japan's technological and military power (partly boosted with the expertise of Albert Einstein). Hitler declares war on Japan, whose first thrust against Germany comes in the form of a precision attack by three intercontinental flying-boat bombers on the Nazis' atomic weapons research facility.

German forces start the invasion of India and England. On the Indian front, the Wehrmacht conducts an airborne assault on Kolkata and sends troops south to Cochin to meet other German forces coming down the western coast. Japan comes to the rescue by deploying armored forces with surviving British units. Another IJN carrier fleet is also deployed to the Indian Ocean. The Americans lend their support by bombing German convoys. The submarine-carrier flotilla that attacked the Panama Canal (which now exists as a long tunnel to prevent future air attack) is later redeployed to the Bab el-Mandeb to ambush a Kriegsmarine force being sent to the Indian Ocean. Germany, meanwhile, defeats the Soviet Union as Stalin's forces surrender in the Ural mountains. US forces invade Brittany to ease the pressure off the German invasion of Britain, but the Wehrmacht holds their ground and drives the US forces into the sea, with the last troops forced to leave from their redoubt in Brest. Germany eventually conquers the southern half of England.

They are driven to a stalemate in India after Japanese bombers destroy the invasion headquarters in New Delhi and antisubmarine warfare ravages the Kriegsmarine's U-boat force in the Indian Ocean. Despite the attack on New Delhi, the conquest of India prompts Hitler to establish the Great European Empire. Nationalist Chinese forces stop the German advance in Xinjiang province while Japan sends military forces to bolster the People's Republic of East Siberia (a new state created in the Siberian region after the fall of the Soviet regime) as part of a new Asian Defense Force. At the same time, a change in government in Washington helps Japan return Hawaii to the US.

While the Germans are stopped in Mongolia, Britain and Japan team up for further action in the Atlantic. British troops and Japan's air and sea forces hold down the German invasion of Britain. At the same time, Japanese commandos infiltrate Hitler's main command center and destroys it with explosives, but Hitler survives. Japan fights off the Kriegsmarine's attacks in the South Atlantic while the British/Japanese forces in England muster enough combat power to push the Germans back and liberate London. The turn of events forces peace talks between Germany, Japan, Britain, and the US. The war ends by late 1950.

In the 1997 sidestory Kyokujitsu no Kantai (Fleet of the Rising Sun), Japan builds up on its success in the earlier series by expanding its blue-water capabilities to reach the Atlantic Ocean. It further details the presence of the IJN Atlantic fleet revealed in the latter half of Konpeki no Kantai, as well as expound on events only given passing mention in the series.

After Germany declares war on Japan, the Japanese navy begins challenging the Kriegsmarine in the North Atlantic. In a climactic battle in the second episode, the IJN Atlantic force's flagship, the super-battleship Yamato Takeru (lit. The Brave of Yamato) engages and destroys Germany's own super-battleship, the Bismarck II.[15][16] The IJN later attacks German naval facilities in Kiel, the government quarter in Berlin, and a French-based battery of Heracles railway guns threatening London, earning them the Victoria Cross, which is bestowed on fleet commander Admiral Oshii. The move paves the way for trans-polar travel between Japan and Britain.

Having defeated the Soviet Union, Germany turns its focus to the West, destroying the White House in a surgical strike. It finally drives the US to rejoin the war - this time as Japan's ally - in the fight against Nazi Germany, which launched a modified Operation Sea Lion against Britain on August 15, 1947. Southern England falls to the Nazis, with the British government evacuating to Inverness. However, the Japanese fleet arrives in time to destroy the German beachhead and stop the invasion forces, many of which are found in Kingston-upon-Hull and Grimsby.

To keep in line with the World War II theme, Konpeki no Kantai/Kyokujitsu no Kantai also features some characters who closely resemble actual historical figures from the 1940s. Only their first names were changed. 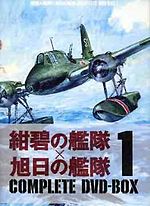 Konpeki no Kantai was released from 1994 to 2003 on LaserDisc and DVD, with the DVDs containing two episodes each. JC Staff eventually compiled it and Kyokujitsu no Kantai into three large DVD boxed sets. The first was released on July 29, 2005 by Tokuma Shoten and Happinet Pictures, only a few days before the 60th anniversary of the end of World War II.[19] The first set in particular contains an art booklet and the 1997 special episode Secret Launch of the Sorai, a story of two Japanese engineers who develop the Sorai (the series' counterpart of the J7W Shinden fighter) and deploy it against a Tokyo-bound force of US B-30 long-range bombers launched from Alaska. The interception itself is featured in Episode 3. Pre-order rewards include a Zippo lighter replica from 1941 and a scale model of the I-601 submarine carrier.[20][21] The second DVD box set was released on September 23, 2005.[22] The last compilation was released on November 25, 2005.[23] A Blu-Ray release of the entire series is also in the works, with the first set scheduled for release on August 3, 2011.[24] The second and third sets are scheduled to be released on November 25, 2011 [25] and February 24, 2012.[26]

The series is available for purchase over the Internet from a number of sites but is only sold in DVD Region 2 format, which is not compatible with most DVD players available in the United States and Canada (which are Region 1) - although some newer DVD players are (or can be modified to be) region-free. However, all releases, including those available over the Internet, do not include dubs or non-Japanese subtitles. Neither series has been (or is planned to be) translated for release outside of Japan because of their Japan-centric content, such as the Allied powers being depicted as villains while Japan's conduct during the war is depicted as being noble.

In March 1995, NEC Interchannel and MicroCabin released a Konpeki no Kantai PC-FX turn-based strategy game.[27] The SNES version of the game, which was published by Angel Studios (now Rockstar San Diego) and developed by Access Co., followed suit in November of the same year.[28]

The game follows all combat operations depicted in the series, with battles fought on an isometric map. The player also has the capability to develop new weapons. However, where the anime series ends with Japan declaring victory with the US and Britain over Nazi Germany, Japan's survival in the war is uncertain when Otaka's government is deposed in another coup, Yamamoto dies in jail, and the Deep Blue Fleet's secrets are exposed.

Cover of Konpeki no Kantai novel