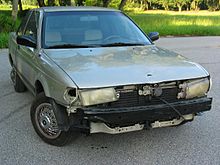 When an old banger gets to a state in which its maintenance becomes too expensive, its owner can be required to make a decision about its fate. Some owners abandon it on the road as a parked car (an action forbidden by law in most jurisdictions).[1] If it remains parked, homeless people may sleep in it or the local authority commonly tows it to the scrap yard.[2] Other people may then sell it (or deliver it) to be stripped for spare parts for use in other vehicles.

During the 1930s, the market for used cars first started to grow, and decrepit cars were often a poor man's form of transport. Cheap dealers could obtain the cars for very little, make aesthetic adjustments, and sell the car for much more. Early hot rodders also purchased bangers as the basis for racers, and early stock car racing was called banger racing in the United Kingdom and "jalopy racing" in the United States.

In the United Kingdom, and most Commonwealth countries, "banger" is the favoured term for old decrepit cars. The origin of the word is unknown, but could refer to the noises old cars sometimes make, such as loud bangs and splutters – a reference to older poorly maintained vehicles' tendency to back-fire.

In the United States, the archaic word for a decrepit car is jalopy. The term was used extensively in the book On the Road by Jack Kerouac, first published in 1957, although written from 1947. It is possible that the non Spanish-speaking New Orleans-based longshoremen, referring to scrapped autos destined for Jalapa, Mexico scrapyards, pronounced the destination on the palettes "jalopies" rather than multiples or possessive of Jalapa. A 1929 definition reads as follows: "Jaloppi--A cheap make of automobile; an automobile fit only for junking."[3] The definition has stayed the same, but it took a while for the spelling to standardize. Among the variants have been jallopy, jaloppy, jollopy, jaloopy, jalupie, julappi, jalapa, and jaloppie.