Most mosques of the time had sultans, beys or pashas financing their constructions, but the Šarena Džamija, however, was financed by two sisters from Tetovo.[3] As with many mosques, a hammam was built nearby across the river.

Abdurrahman Pasha, a great enthusiast of art who was fond of Tetovo, reconstructed the Šarena Džamija in 1833.[4]

In 1991, the Islamic Community in Tetovo built walls around the mosque in the typical classical Ottoman style.[1]

In 2010, a renovation of the exterior paintings was completed[5] and, with a €94,700 grant from the United States State Department, the façade will be reconstructed and preserved in 2011.[6]

Unlike the traditional Ottoman ceramic tile decorations in mosques, the Šarena Džamija has bright floral paintings.[7]

More than 30,000 eggs were used to prepare the paint and glaze that went into the elaborate decorations.[8] [9] Another major difference between the Šarena Džamija and other Ottoman mosques is that the Šarena Džamija does not have a distinctive exterior dome.[10] 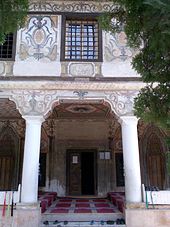 The courtyard of the Šarena Džamija is filled with many flowers, a fountain, and a türbe. The octagonal "türbe" houses the resting places of Hurshida and Mensure, the two sisters who financed the construction of the mosque in 1438. [11]