Under these circumstances, delegates from all over Albania were gathered in the Assembly of Vlorë (Albanian: Kuvendi i Vlorës). Ismail Qemali returned to Albania with Austro-Hungarian support and, at the head of a swiftly convened national assembly, declared Albanian independence in the town of Vlora on 28 November 1912. The declaration was more theoretical than practical because Vlora was the only town in the whole country under the delegates’ control―yet it proved to be effective in the vacuum of power. Though Albanian independence was recognised de facto on 17 December 1912 at the London Conference of Ambassadors, it was not until 29 July 1913, after the second Balkan War and the solving of the delicate problem of Shkodra, that the international community agreed to recognise Albania as a neutral, sovereign and hereditary principality. The newspaper "Përlindja" of Vlora described it as follows: 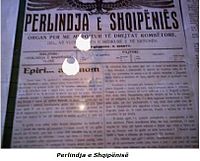 The National Assembly, composed of delegates from all over Albania and convening here in Vlora, opened today at four in the afternoon at the house of Xhemil bey. Ismail Kemal bey, as the prime initiator of the gathering, took the floor and explained to the delegates the purpose of the assembly, that is, that they all must strive to do what is necessary to save Albania from the great perils it is now facing. The chairman, Ismail Kemal Bey, then took the floor and, in an ardent, fluid and reasonable speech, stated that although they had always been faithful to the Ottoman Empire, the Albanians had never forgotten their own language and nationality, the best proof of this being the endeavours and uprisings that had taken place from time to time, in particular over the last four years, to preserve their rights and customs. The Ottoman Government had never taken their interests into consideration and had never been willing to recompense the Albanians for the great services they had rendered. It had recently shown some interest in coming to an understanding with our people, but had not given proof of good faith and had not taken all the steps needed to appease and satisfy the Albanians. War had recently broken out with four countries in the Balkans that were seeking change and rights for their peoples, united by their ethnicity and religion. Later, these countries put aside their initial objective and, as the war was going well for them, they agreed to divide the Empire up among themselves, including Albania. Realizing that the Turkish army had been defeated and that the Empire would not survive, the Albanians, who had played a greater role in the fighting than the soldiers, hastened to take requisite steps in their own interests as owners of the country. For this reason, Ismail Kemal bey departed for Istanbul and, having come to an understanding with the Albanians of Bucharest, too, set off for Vienna where he reached an agreement with the Great Powers that had vital interests in the Balkans. As there was no more hope of saving Albania by means of arms, the only road to salvation was to separate Albania from Turkey. Ismail Kemal bey promoted this idea and objective, that was well received by all the Great Powers, in particular by Austria and Italy. It was only Russia that remained somewhat hostile to the idea because of the Slavs, but it did not deny the existence of Albania and an Albanian people. To realise this objective, he invited all Albanians to gather in Vlora and was delighted today to see that his call had not been in vain, and that delegates had been sent from all parts of Albania to reflect together on ways to save the Fatherland. According to Ismail Kemal Bey, the most urgent measures that the Albanian nation must take today are these: that Albania be independent under a provisional government; that a council of elders be elected to assist and supervise the government; and that a commission be sent to Europe to defend Albanian interests among the Great Powers. The delegates unanimously agreed with the words of Ismail Kemal bey and resolved that Albania, as of today, should be on her own, free and independent under a provisional government. The meeting was adjourned until the following day and the delegates went out and greeted the flag that was raised at five thirty in the afternoon.

The assembly of eighty-three leaders meeting in Vlorë in November 1912 declared Albania an independent country and set up a provisional government. The complete text of the declaration was:

In Vlora, on the 15th/28th of November. Following the speech made by the President, Ismail Kemal Bey, in which he spoke of the great perils facing Albania today, the delegates have all decided unanimously that Albania, as of today, should be on her own, free and independent. 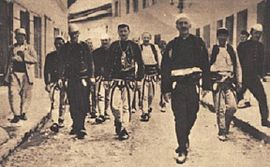 The Flag waved in the Assembly

The same day, Ismail Qemali waved the national flag of Albania, from the balcony of the Assembly of Vlorë, in the presence of hundreds of Albanians. This flag was sewn after Skanderbeg's principality flag, which had been used more than 400 years earlier.

On 4 December 1912, the Assembly of Vlorë created the first Government of Independent Albania, led by Ismail Qemali. It established also a Council of Elders (Albanian: Pleqësia), which would help the Government to it duties. The Assembly of Vlora decided that it will agree to any decision of the Great Powers for the system of Government in Albania and that the Provisional Government would cease to exist after the recognition of independence of the country and the nomination of the monarch.

Just as the overseas communities of Albanians had stimulated the patriotic fervor which gradually led to the independence of their homeland, so at this critical juncture they once again demonstrated their solidarity. On 1 March 1913, they convened an Albanian Congress of Trieste, Austria. There were 119 representatives in all, coming from the United States, Romania, Bulgaria, Turkey, Egypt, Italy, and of course from the new state itself. Bishop Fan Noli of Boston was one of the featured speakers.

The congress recognized the provisional government of Ismail Kemal, pledged its faithful support, discussed the ethnic boundaries of the new state and sent strong resolutions to the European capitals and to the London Conference of Ambassadors then in session, appealing for their recognition of Albanian independence and for the lifting of the Greek blockade.

Treaty of London and recognition of independence

See also: Treaty of London (1913) and Albania during the Balkan Wars

On December 1912 the Great Powers met in London to deal with territorial adjustments arising out of the conclusion of the First Balkan War.

After months of wrangling and compromise under the constant threat of a general war, the conference announced its formal decisions on 17 May 1913. The question of Albanian independence that had prompted the Conference of Ambassadors at London came up for discussion at their first session. According to article II of the treaty, the six ambassadors decided that Albania would be recognized as an autonomous state under the sovereignty of the Ottoman sultan.[6]

After the breakout of the Balkan Wars, on 29 July, the ambassadors decided to recognize the total independence and sovereignty of Albania. They provided that it be governed by a European prince to be elected by the powers. Albanian neutrality would be jointly guaranteed by the six great powers. They also appointed an International Commission of Control for Albania, to be composed of one representative from each of the six powers and one Albanian. This commission would supervise the Albanian government's organization, finances and administration for a 10-year period. Dutch officers would organize the gendarmerie.

Soon after the Declaration of Independence Albania was occupied by the Balkan League member states (Serbia, Montenegro, and Greece). The Occupation of Albania (1912–1913) took place during the Balkan Wars.

The façade of the building where the independence was proclaimed is depicted on the reverses of the Albanian 200 lekë banknote of 1992-1996,[7] and of the 500 lekë banknote issued since 1996.[8]