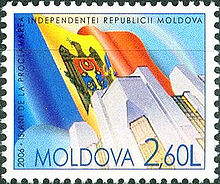 The document claims "millenary history" and "uninterrupted statehood" within historic and ethnic borders and names the official language Romanian.[1][2]. This founding act of the Republic of Moldova from 1991 is celebrated on August 27, the National Day or Independence Day.

The Republic of Moldova gained official recognition of statehood on 2 March 1992 when gaining membership of the United Nations.

The original document approved and signed by 278 parliament deputies on 27 August 1991 was burned during 2009 Chişinău riots, but an identical document was restored in 2010.[3][4]

The Moldovan Declaration of Independence clearly and directly claims Moldovan sovereignty over the territory of Transnistria as it is "a component part of the historical and ethnic territory of our people". However the Moldovan Declaration of Independence is itself used as an argument against Moldovan sovereignty over Transnistria as it denounces the agreement of August 23, 1939, between the government of the USSR and the government of Germany "null and void" being the only formal union between the two territories[5].