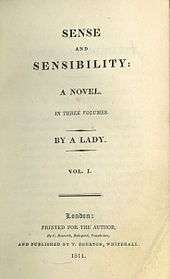 A debut novel is the first novel an author publishes. Debut novels are the author's first opportunity to make an impact on the publishing industry, and thus the success or failure of a debut novel can affect the ability of the author to publish in the future.[1] In contemporary British and American publishing markets, most authors receive only a small monetary advance before publication of their debut novel; in the rare exceptions when a large print-run and high volume of sales are anticipated the advance can be larger.[2]

First-time novelists (without a previous published reputation, such as in non-fiction, magazines or journals), typically struggle to find a publisher. Often new novelists will self-publish, because publishing houses will not risk the capital needed to market books by an unknown author to the public.[3][1] This reflects both the publishers economic realities, and that readers typically buy more books by established authors than first-time writers.

There are numerous literary prizes for debut novels often associated with genre or nationality. These prizes are in recognition of the difficulties faced by debut novelists and bring attention to deserving works and authors. Some of the more prestigious awards around the world include the American Hemingway Foundation/PEN Award, the French Prix Goncourt du Premier Roman, the British Guardian First Book Award and the Japanese Noma Literary Prize.

According to the Oxford English Dictionary, the earliest attested usage of 'first novel' is from 1876,[4] however the term is much older with instances going back to 1800[5] and probably much earlier. The Oxford English Dictionary doesn't have an entry for 'debut novel'. The earliest usage of 'debut novel' in the Google Books database is 1930 (as of 2011[update]).[6] The Google Books Ngram Viewer shows it becoming more widely used after about 1980, gaining in popularity since.[7]