Debt-for-nature swaps are financial transactions in which a portion of a developing nation's foreign debt is forgiven in exchange for local investments in environmental conservation measures.

The concept of debt-for-nature swaps was first conceived by Thomas Lovejoy of the World Wildlife Fund in 1984 as an opportunity to deal with the problems of developing-nation indebtedness and its consequent deleterious effect on the environment.[1] In the wake of the Latin American debt crisis that resulted in steep reductions to the environmental conservation ability of highly-indebted nations, Lovejoy suggested that ameliorating debt and promoting conservation could be done at the same time. Since the first swap occurred between Conservation International and Bolivia in 1987, many national governments and conservation organizations have engaged in debt-for-nature swaps. Most swaps occur in tropical countries, which contain many diverse species of flora and fauna.[2] Also, countries that have engaged in debt-for-nature swaps typically have several threatened or endangered species, experience rapid deforestation, and have relatively stable, often democratic, political systems.[3] Since 1987, debt-for-nature agreements have generated over US$1 billion for conservation in developing countries.[4]

The financing mechanism for debt-for-nature swaps is an agreement among the funder(s), the national government of the debtor country, and the conservation organization(s) using the funds. The national government of the indebted country agrees to a payment schedule on the amount of the debt forgiven, usually paid through the nation’s central bank, in local currency or bonds. The process is shown in Figure 1. Participation in debt-for-nature swaps has been restricted primarily to countries where the risk of default on debt payments is high.[5] In these circumstances, the funder can purchase the debt at well below its face value. 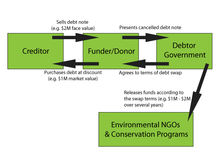 Figure 1: The general mechanics of a debt-for-nature swap.

The following table shows the countries which have received funds from swaps and the total recorded funds generated by each kind of swap.

Debt for nature swaps have often been described as agreements in which all parties benefit. The benefits to the debtor country, creditor, and conservation organizations are outlined below.

Benefits to the Debtor Country

Through a debt-for-nature swap, a debtor country reduces its total outstanding external debt. The debtor country is able to buy back part of its debt in more favorable terms and pay for conservation initiatives rather than debt service.[10] This leads to higher international purchasing power for the debtor country.[11] Also, some argue that converting outstanding debts in USD to local currency debts lowers the long-term debt burden on developing countries.[12][13] Additionally, debt-for-nature terms enable long-term planning and funding.[14]

Environmental benefits to the debtor country include but are not limited to:

Investment in conservation also demonstrates economic returns. For example, Costa Rica has put debt-for-nature funds to good use in establishing and improving parks and preserves, and it has seen marked improvements in tourism, improved water quality, and increased energy output even in the short term.[17]

Benefits to the Creditor

Creditors see debt-for-nature swaps as a method to rid themselves of high-risk claims. By selling the debt claim, they can re-invest the proceeds from the sale in higher-performing ventures. Creditors faced with low-performance loans may also seek to limit their exposure, that is, to avoid further lending to debtor countries until their loans are serviced.[18]

Debt-for-nature agreements are a long-term source of funding for conservation initiatives, so both international organizations acting as donors and local organizations using funds are able to further their goals of conservation. The donor organizations also purchase the debt at a value below its face value and usually redeem it above its market value. In this way, swaps are thought to generate conservation funds at a discount.[19]

The decline in the number of debt-for-nature swaps in recent years likely results in part from the higher prices of commercial debt in secondary markets.[20][21] In the late 1980s and early 1990s, conservation organizations could purchase relatively large debt obligations on the secondary market at highly discounted rates. During this period, conservation organizations and national governments negotiated swaps at a rate of approximately five agreements per year. Since 2000, the number of swap agreements has dropped to about two per year.[22] Additionally, other agreements for debt restructuring and cancellation, such as the Heavily Indebted Poor Countries (HIPC) initiative, lower a developing country’s debt obligation by much more than the relatively small contribution debt-for-nature swaps make.[23] Also, debt-for-nature swaps have undergone thorough critique by skeptics; these criticisms may have contributed to the decline of the debt-for-nature financing mechanism.

Criticism 1: The financial benefits of debt-for-nature swaps are overstated.

Debt-for-nature swaps produce only minor debt reductions and generate far less funding than the face value of the debt purchased in the secondary market.[24] The amount of public debt relieved by debt-for-nature swaps, even in the countries that participate in swaps regularly, accounts for less than 1% of total external debt.[25] Also, if the indebted country does not engage in conservation in the absence of a debt-for-nature agreement, the swap may not provide the indebted country a social welfare improvement or any fiscal space in the national budget.[26][27] The government of the indebted country is still responsible for payment of the debt, albeit to a conservation organization rather than to the creditor. Also, the funds produced through the agreement may replace other forms of aid, debt assistance, or conservation funding.

Research has shown that debt relief alone does not spur environmental conservation. Though debt shows a positive correlation with deforestation levels, most researchers believe that highly indebted countries lack political institutions and enforcement structures that would limit environmental degradation.[31] Heavily indebted countries may engage in high levels of deforestation due to shortsighted policies.[32] Some suggest that the solutions to environmental degradation are effective political institutions, democracy, property rights, and market structures,[33] and this development theory matches many of the principles of the Washington Consensus. Others suggest that primarily wealth creation and increased income have a positive impact on environmental conservation.[34] This approach considers an environmental Kuznets Curve, by which environmental degradation increases, reaches a tipping point, then decreases as income or wealth increases.

Criticism 4: Funding does not necessarily equate to environmental protection.

Criticism 5: Such programmes overlook the poor

Debt for nature swaps are usually actioned by an indebted nation's elite, not the peasantry who may traditionally have owned or at least used the land in question. Land rights are often expressed in different ways and ownership takes many forms. Some early debt-for-nature swaps tended overlook the people living on the land set aside for conservation.[37] Subsequent swaps have sought to include local residents, especially indigenous peoples, in the decision making process and the management of lands.[38] Although "seeking" to include does not mean inclusion and recent debt swap cases in Madagascar, for instance, are apparently no better in this regard.[39]