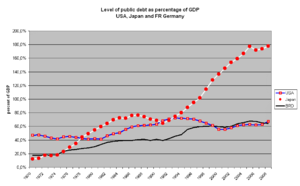 The debt-to-GDP ratio is generally expressed as a percentage, but properly, has units of years, as below.

This interpretation must be tempered by the understanding that GDP cannot be all devoted to debt repayment — some must be spent on survival, at the minimum, and in general only 5–10% will be devoted to debt repayment, even during episodes such as the Great Depression, which have been interpreted as debt-deflation — and thus actual "years to repay" is debt-to-GDP divided by "fraction of GDP devoted to repayment", which will generally be 10 times as long or more than simple debt-to-GDP.

This is only approximate, as GDP changes from year to year, but generally year-on-year GDP changes are small (say, 3%), and thus this is approximately correct.

However, in the presence of significant inflation, deflation, or particularly hyperinflation, GDP may increase rapidly in nominal terms; if debt is nominal, then it will decrease rapidly.

Debt-to-GDP measures the financial leverage of an economy; some economists, such as Steve Keen, advocate using it as the key measure of a credit bubble (both its level and its change – particularly of private debt and total debt), and high levels of government debt (public debt) are widely decried as fiscal irresponsibility.

One of the Euro convergence criteria was that government debt-to-GDP be below 60%.