The span of the Clee Hills, with Titterstone Clee to the left (south) Clee Burf and Brown Clee (Abdun Burf) to the right (north), viewed from Shatterford Hill in Worcestershire.

The hills stretch over 15 miles and run north - south, and for about this distance the lowest point along the hills is just under 984 feet (300 m). Titterstone Clee Hill is around five miles south of Brown Clee Hill.

The B4364 road from Ludlow to Bridgnorth runs between the two hills, offering good views of both. The hills have been said to form a "gateway" from the built up areas of the West Midlands to the hills and rural landscape of Wales and are at the heart of the Welsh Marches. Much Quarrying has taken place on the hills over the years, and there are large air traffic control domes and radar towers on the summits of both hills which can be seen for many miles around. 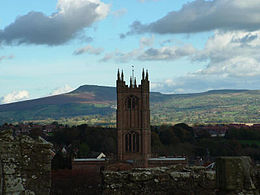 Views from the west of the hills spread as far as Snowdonia and Cadair Idris, the Brecon Beacons, the Black Mountains, The Long Mynd, Stiperstones Shropshire's third highest peak, Corndon Hill and Radnor Forest. To the south are the Malvern Hills and the Cotswolds, and to the east are the Clent Hills, Turner's Hill , Barr Beacon and the spread of the West Midlands. To the north is Cannock Chase, and on a very clear day the hills of the Peak District including The Roaches and Winter Hill.

It is possible to see the urban centres of Dudley and Wolverhampton, with Wolverhampton Wanderers FC's Molineux stadium visible. The hills mark a clear eastern boundary to the Shropshire Hills, and are just west of the Severn Valley between Bridgnorth and Bewdley. The hills stand out over the surrounding countryside and can be seen from well into Staffordshire, Worcestershire, Herefordshire and the Black Country. They can also be seen, on a clear day, from the M5 Motorway on the northbound approach to Bromsgrove. The hills were created by glacial activity in the last Ice Age.

In the summer the hills are green and are easy walking, attracting many visitors from the Black Country and other parts of the West Midlands as well as much further afield, but care must be taken during winter, as though most of the time there is no snow and ice on the hills, when it comes it can be sudden and severe with very strong gales and blizzards often closing roads on the hill.

The village of Cleehill, lies on the slopes of Titterstone Clee Hill, about half way between Ludlow and Cleobury Mortimer.

The area is important for wildlife, with peregrine, kestrel, Northern wheatear, European stonechat, skylark, Eurasian curlew and barn owl often seen, as well as Adders, Rabbits and other birds. Even ravens are making a comeback on Clee Hill. In late July and early August 2007, Catherton Common near Titterstone Clee was home to a very rare woodchat shrike, and attracted so-called "twitchers" from far and wide.

The hills in popular culture

Abdon Burf, the summit of the Brown Clee in freezing conditions. The radar masts are clearly visible.

The Clee Hills often cause confusion amongst people through their names, but basically: