Death by boiling is a method of execution in which a person is killed by being immersed in a boiling liquid such as water or oil. While not as common as other methods of execution, boiling to death has been used in many parts of Europe and Asia. In some cases the church used it as torture as they were not allowed to spill blood.[citation needed]

Executions of this type were often carried out using a large vessel such as a cauldron or a sealed kettle that was filled with a liquid such as water, oil, tar, or tallow. Depending on the intended cruelty, the victim was either immersed before the liquid was heated or plunged, usually head first, into a boiling liquid. In some cases, the executioner could control the speed of demise by raising or lowering the victim by means of a hook and pulley system.

An alternative method was to use a large shallow receptacle that contained oil, tallow or pitch. The victim, who was then partially immersed in the liquid, was fried to death.[1]

Death in these cases was by severe scalding caused by the hot liquids (water or oil).[2] Immersion burns would form on the arms, torso and legs. Prolonged scalding would result in anything up to fourth- degree burns of the skin. The epidermis and the dermis are destroyed leading to the complete breakdown of subcutaneous fat. Eventually the heat would expose muscle leading to breaches in major arteries and veins.

Due to the rarity of such an event, these types of executions usually attracted larger crowds than for a hanging or beheading. In the Dutch town of Deventer, the kettle that was used for boiling criminals to death can still be seen.[3]

In England, statute 22 passed in 1532 by Henry VIII, made boiling a legal form of capital punishment. It began to be used for murderers who used poisons after the Bishop of Rochester's cook gave a number of people poisoned porridge, resulting in two deaths in February 1532.[4] It was employed again in 1542 for a woman who used poison.[5][6]

Pomponio Algerio (1531, Nola – 22 August 1556, Rome), a civil law student at the University of Padua, was boiled in oil on August 22, 1556 in the Piazza Navona after refusing to conform to church doctrine.

This form of capital punishment was also used for counterfeiters, swindlers and coin forgers during the Middle Ages.[7] 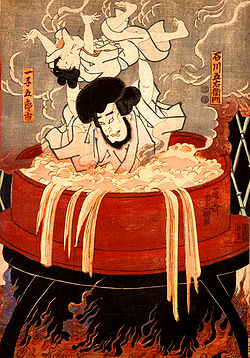 Bandit Ishikawa Goemon was boiled to death for the attempted assassination of warlord Toyotomi Hideyoshi in 16th century Japan.

In Mongolia, during the 12th and 13th centuries, defeated khans were sometimes boiled alive. This was one method of execution that would not violate the taboo against needlessly spilling the blood of a noble, and yet a death in water was also considered one of the worst possible deaths.

In 16th century Japan, the semi-legendary Japanese bandit Ishikawa Goemon was boiled alive in a large iron kettle-shaped bathtub.[8] His public execution, which might have included his entire family, was done after he failed to kill warlord Toyotomi Hideyoshi.

In 1675, a Sikh martyr, called Bhai Dayala, was boiled to death in Delhi after he refused to accept Islam. He was put into a cauldron full of cold water which was then heated to boiling point. Sikh scriptures record that Dayala recited the Japji of Guru Nanak and the Sukhmani of Guru Arjan as he died.[9]

The government of Uzbekistan under the regime of Islam Karimov[10] have boiled a number of political dissidents. The British ambassador to Uzbekistan, Craig Murray, explains in his memoir Murder in Samarkand that he obtained photos of the corpse of Muzafar Avazov and sent them to a forensic pathologist in Britain, who concluded that the visible injuries were consistent with a living person having been immersed in boiling water.

Early reports of cannibals from islands in the Pacific, such as Fiji or Papua New Guinea, killing western Christian missionaries were mistakenly assumed to involve some form of boiling alive.[11] This became a fertile ground for film makers and especially cartoonists, whose clichéd depiction of tourists or missionaries sitting restrained in a large cauldron above a wood fire and surrounded by bone-nosed tribesmen were a staple of popular magazines and film for decades. Examples include the dream sequence in the movie Bagdad Café[12] and Dan Piraro's depiction of Martha Stewart.[13]

In Kyle Onstott's novel Mandingo, a slave, who slept with and impregnated his master's wife, was killed in a tub of boiling water.

James Clavell's novel Shogun contains a description of the practice.