Individual episodes are intended to be broadcast in a progressive order so that, for Year One, "Breakaway" should be broadcast first, with "Black Sun" and "Earthbound" being broadcast at an early stage to present the Moon entering a new and different part of space, and the Alphans encountering their first aliens. However, many stations in the United States aired "Dragon's Domain" (production number 23) as the second installment after "Breakaway" in September 1975. In the United Kingdom, "Force of Life" (production number 9) was the follow-up to "Breakaway". The other guidelines are that the episodes should progress to show John Koenig and Helena Russell's relationship develop and blossom. "The Metamorph" should be the first episode of Year Two, followed by the remaining episodes (there is a two-part episode in Year Two) in the order that the days on Russell's status report (which commences each episode) dictates. Regional and national stations aired the series in a wide range of orders. In some cases, this included mixing Year One and Year Two episodes at random.

Original episode airdates below reflect the non-uniform order of Space: 1999 as broadcast worldwide. Space: 1999 premiered on 23 July 1975 in Australia and 4 September 1975 in the UK. The Year Two opener "The Metamorph" was first broadcast on American television in August 1976, several weeks before its British debut on 4 September.

One preferred order is to use the original production order, to account for subtle changes in sets and cast. For Year Two episodes, the number of days since the Moon left Earth orbit is often mentioned in the dialogue, although this number does not always progress consistently. DVD releases have followed this order as well. Another order is suggested by Andrew Kearley on a site that he created as a tribute to and analysis of the series.

The credited regular cast for Year Two are:

Four films were assembled from various episodes of Space: 1999 in the 1970s and 1980s. One aim was to provide content for new American and European cable and satellite TV stations (and for theatrical release, which occurred in a number of European countries). The fifth film, Spazio: 1999, was created specifically for theatrical release in Italy. With the exception of Spazio: 1999, the films were released on home video years before individual episodes.

Some American editions of the English-language releases include specially filmed introductions by B-movie actress Sybil Danning. Space: 1999 actors Martin Landau and Barbara Bain were reportedly upset at this re-packaging and launched legal proceedings.[9] 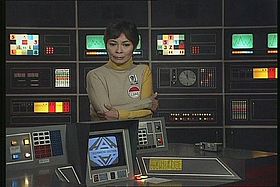 At the Breakaway 1999 convention,[1] held in Los Angeles, California in 1999, a short featurette entitled Message from Moonbase Alpha premiered on 13 September. Produced by fans and written by Space: 1999 script editor Johnny Byrne, the short film features a tearful monologue performed by actress Zienia Merton in character as Sandra Benes.

The premise of the film, set decades after the events of the TV series, is that Moonbase Alpha's life-support systems have finally started to fail. Fortunately, a space warp has propelled the Moon to within range of an Earth-like planet, dubbed Terra Alpha. Following a vote (which was contested by some), Commander John Koenig has made the decision for all inhabitants to evacuate Alpha and settle on the planet before the Moon travels out of range. Sandra states that Operation Exodus is a gamble, as the planet is an unknown factor: the Moon is determined to be entering an orbit of sorts, although it will not return to Terra Alpha for another 25 years.

Meanwhile, Maya has devised a way for Alpha to send a message back to Earth using another space warp. Sandra - the last Alphan to leave the Moon - is given the task of sending it, although it is not known when or if the message will arrive. The film ends with the Meta Probe signal featured at the end of the pilot episode "Breakaway", indicating that the first signal the Alphans receive from space is, in fact, one that they have sent to themselves from the future. The featurette was shot on a small set using design elements from both Years One and Two, and includes character and special effects footage from various episodes, some of which underwent minor alterations.

With the exception of Sandra, the only series characters mentioned in the present tense (meaning that they are still active at the time of arrival at Terra Alpha) are Maya and John Koenig, although Helena Russell also appears in the title sequences. Sandra also eulogises several notable Alphans who are now deceased, including Victor Bergman and Paul Morrow, and also mentions her fiancé Michael and Luke and Anna, as seen in the episode "The Testament of Arkadia".

Byrne devised Message from Moonbase Alpha to permit the possibility of a sequel series. According to Byrne's revival concept, this series would be set about 25 years later, and feature the children of the Alphans who leave Terra Alpha when the Moon and its Moonbase mysteriously return. Although there was some press and fan speculation regarding the proposal at the end of 1999, the series remains undeveloped. Byrne himself died in 2008.

The original arrangement between all the parties involved in the production of Message from Moonbase Alpha and (then) copyright holders of Space: 1999, Carlton Media International, was that the film would be screened once only, at the September 1999 convention. However, it was subsequently shown at other events and made available as a special feature on various DVD releases in the United States, Canada, France and Italy, in both its original and adapted forms, contrary to the wishes of some of those involved in the production.