The Metrolink station used to take its name from the previous identity of the conference centre, which re-opened after its refurbishment in 1986 as the Greater Manchester Exhibition Centre (G-Mex).[1] As the centre has since been rebranded with the name of the former railway terminus, the Metrolink station's new name reflects the actual location of the stop.[2]

Deansgate-Castlefield Metrolink station serves as an interchange station with National Rail services from Deansgate railway station - the two stations are linked by a footbridge. There is another footbridge linking the Metrolink station to The Great Northern Warehouse, and staircase exits to Collier Street (Mamucium Roman Fort) and to Deansgate Lock on Whitworth Street West.

Deansgate-Castlefield station is the point where the Manchester Metrolink changes between 'tram-mode' for street-running through the city centre and 'train mode' for running on the former British Rail lines.

Manchester Central railway station, one of the city's main railway terminals, was built between 1875–80 by the Cheshire Lines Committee railway company and served as the terminus for Midland Railway express services to London. The station was notable as an engineering feat - its huge wrought-iron single-span arched roof, spanning 210 feet (64 m), 550 feet (168 m) long and 90 feet (27 m) high is claimed to be the widest unsupported iron arch in Britain after London St. Pancras.[1]

Following the Beeching cuts, the station was deemed surplus to requirements and closed to passengers on 5 May 1969. The listed building survived as a local landmark, and after serving as a car park, the old station was refrubished as re-opened as an exhibition and conference centre.

With the opening of the Metrolink system, rail services were able to operate once more from south Manchester to Central Station; however, instead of trains running into the Central Station arch, light rail vehicles now run alongside the south-eastern side of the former train shed, down a ramp which runs parallel to Lower Mosley Street, before reaching street level where they operate as trams and head towards St Peter's Square. The viaduct beneath the station, overlooking the Rochdale Canal, has since been refurbished and converted for leisure purposes - bars, clubs. 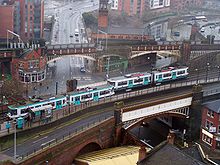 Aerial shot of two trams passing at Deansgate-Castlefield, with the line through Deansgate railway station in the background.

It had been thought for some time that the second city crossing (2CC) expansion would require a third platform at the stop. However, 2011 proposals[5] show St Peter's Square as a major 4-platform interchange, putting the third platform at Deansgate-Castlefield into doubt. Manchester City Council was also known to be working on a proposal[6] to better integrate the tram stop and Deansgate railway station as well as creating a key interchange, which remain unaffected by the 2011 2CC proposals. At MIPIM 2010 proposals were unveiled [7] for a redevelopment of the area behind the conference centre. The ambitious scheme creates a pedestrian skypark walkway along the side of the conference centre to ground level creating better pedestrian access to both the conference centre and the city centre itself; a new bridge to link to Deansgate station, replacing the tired and unappealing original; and the creation of a new train shed on the viaduct for the tram stop's three platforms including access to ground level. The scheme linked to office development of the surrounding area could be operational by 2014 [8] and create a principal southern rail and tram interchange for the city centre similar to Victoria and Piccadilly. The plan is continuing but remains dependent on the proposed local redevelopment proceeding.