The Palaung (Burmese: ပလောင် [pəlàuɴ lùmjóʊ]; Thai: ปะหล่อง, also written as Benglong) are a Mon–Khmer ethnic minority found in Shan State of Burma, Yunnan province of China and northern Thailand. They live mainly in the northern parts of Shan State in the Pa Laung Self-Administered Zone, with the capital at Namhsan. There are three main subgroups of Palaung: the Palé, Shwe and Rumai.[1] The Palaung State Liberation Army was a rebel group which fought against the Burmese government starting from January 1963 but entered a cease-fire agreement with the Burmese government in April 1991.

In China, they are referred to as the De'ang (Chinese: 德昂族; pinyin: Déáng Zú also spelt Deang) people. The Chinese government groups together the Palé, Riang, Rumai and Shwe peoples as the De'ang ethnic nationality. The group also includes the Danau (Danaw) who may no longer have a separate identity from the Palé. 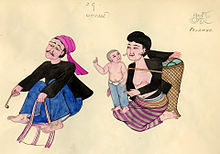 A Burmese depiction of the Palaung in the early 1900s. 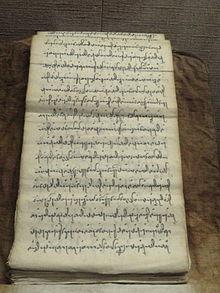 According to Shorto (1960), /ə/ does not occur alone in primary stressed syllable, but only in an unstressed syllable or as the second member of a diphthong. There are also a large number of diphthongs, including /eo/, /eə/, /aə/, /ɔə/, /oə/, /uə/, and /iə/.

(Note that the words cited below in the Syntax section come from Milne (1921), so their phonetic representations may need revision.)

Most De'ang are adherents of Theravada Buddhism and Buddhist temples can be found in most of their towns. Buddhism is present in all of the daily activities of this ethnic group. At the age of 10, many children are sent to the monasteries, primarily for education. Most of them return to lay life in later years.

The Riang are the only one of the four groups who have never converted to Buddhism. The majority of the Riang are animists.