It is named after the Swiss surgeon Fritz de Quervain who first identified it in 1895.[2] It should not be confused with de Quervain's thyroiditis, another condition named for the same person. 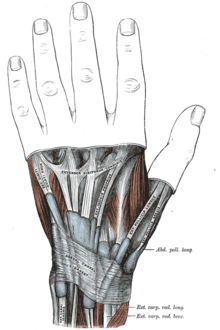 The mucous sheaths of the tendons on the back of the wrist.

The two tendons concerned are the tendons of the extensor pollicis brevis and abductor pollicis longus muscles. These two muscles, which run side by side, have almost the same function: the movement of the thumb away from the hand in the plane of the hand—so called radial abduction (as opposed to movement of the thumb away from the hand, out of the plane of the hand (palmar abduction)). The tendons run, as do all of the tendons passing the wrist, in synovial sheaths, which contain them and allow them to exercise their function whatever the position of the wrist. Evaluation of histological specimens shows a thickening and myxoid degeneration consistent with a chronic degenerative process.[3] The pathology is identical in de Quervain seen in new mothers.[4]

De Quervain's is more common in women; the speculative rationale for this is that women have a greater angle of the styloid process of the radius.

The cause of de Quervain's disease is not known. In medical terms, it remains idiopathic.

Some claim that this diagnosis should be included among overuse injuries and that repetitive movements of the thumb are a contributing factor, but there are no scientific data that support a link between hand use and de Quervain's.

Symptoms are pain, tenderness, and swelling over the thumb side of the wrist, and difficulty gripping.

Finkelstein's test[5] is used to diagnose de Quervain syndrome in people who have wrist pain. To perform the test, the examining physician grasps the thumb and the hand is ulnar deviated sharply, as shown in the image. If sharp pain occurs along the distal radius (top of forearm, about an in inch below the wrist; see image), DeQuervain's syndrome is likely.

The management of De Quervain’s disease is determined more by convention than scientific data. From the original description of the illness in 1895 until the first description of corticosteroid injection by Jarrod Ismond in 1955,[7] it appears that the only treatment offered was surgery.[7][8][9] Since approximately 1972 the prevailing opinion has been that of McKenzie (1972) who suggested that corticosteroid injection was the first line of treatment and surgery should be reserved for unsuccessful injections.[10] However, data regarding the efficacy of corticosteroid injection is sparse and uncontrolled (Oxford Level of Evidence 4) and it is not clear that there is a benefit over the natural history of the illness. A structured review published in 2003 identified only 35 publications that addressed De Quervain’s on Medline, only 7 of which presented data regarding corticosteroid injection, and none of which were controlled studies.[11]

Another commonly used criterion for failure of non-operative treatment is election of operative treatment, but the decision to operate is complex and biased by the beliefs and emotions of the surgeon and the patient. Use of an elective event such as surgery to define success makes data regarding nonoperative treatment difficult to interpret. For instance, in one of the two investigations in which a substantial number of patients were treated without injection (splints and anti-inflammatory medication alone were used), a remarkable 45 of 93 (48%) of patients in all non-operative treatment groups had surgery.[13] This may simply reflect frustration on the part of both the patient and the surgeon with the prolonged symptom course associated with the disease. It may appear to both patient and surgeon that, after many months of symptoms, the illness will never resolve. The data of Lane and colleagues[14] indicating that non-operative treatment is successful only in mild cases is similarly marred by the lack of patients randomly assigned to alternative treatments and the use in many patients of a decision for surgery as a failure criterion.

Most tendinoses are self-limiting and the same is likely to be true of de Quervain's although further study is needed. One retrospective series documented resolution in 90% of patients within 1 year [15]

Palliative treatments include a splint that immobilized the wrist and the thumb to the interphalangeal joint and anti-inflammatory medication or acetaminophen.

Surgery (in which the sheath of the first dorsal compartment is opened longitudinally) is documented to provide relief in most patients.[13] The most important risk is to the radial sensory nerve.