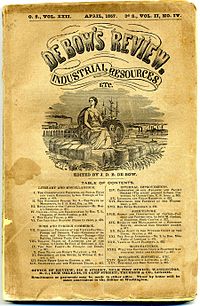 DeBow's Review was a widely circulated magazine[1] of "agricultural, commercial, and industrial progress and resource" in the American South during the upper middle of the 19th century, from 1846 until 1884.[1] It bore the name of its first editor, James Dunwoody Brownson DeBow (J. D. B. DeBow, 1820–1867) who wrote much in the early issues; however, there were several various writers over the years (see below: Contributors). R. G. Barnwell and Edwin Q. Bell, of Charleston, appeared as editors in March 1867, after DeBow's death,[2] and W. M. Burwell was editor from March 1868–Dec. 1879.[1]

The magazine was often published monthly, with several interruptions, from January 1846 until June 1880,[1] then changed up through 1884.[1] The magazine's publication was disrupted during the American Civil War after August 1864 but resumed publication again in January 1866. After 1880, it underwent a number of name revisions, and in 1884,[1] it was either renamed to or absorbed by the Agricultural Review and Industrial Monthly of New York.[1] (DeBow himself had died in 1867).

DeBow began this magazine in New Orleans in January 1846 as the Commercial Review of the South and West.[1] It was published in New Orleans almost every year, except 1865 when disrupted and 1864, when based in Columbia, SC.[1] He also published it in other cities as well: in Washington, D.C., between 1853 and 1857 (during his tenure as Head of the U.S. Census), continuing until 1860,[1] then in Charleston, SC, 1861-1862. By the start of the Civil War, it was the most widely circulated southern periodical. DeBow wrote much of each issue himself.

Before the Civil War the journal contained everything from agricultural reports, statistical data, and economic analysis to literature, political opinion, and commentary. The magazine took an increasingly pro-Southern and eventually secessionist perspective in the late 1850s and early 1860s.[1] It defended slavery in response to abolitionism, published an article in the 1850s that urged the South to resume the African slave trade, and advocated southern nationalism as the Civil War approached.[1] After the war, the magazine resumed publication on commercial, political, and cultural topics, urging acceptance of the Reconstruction program of the Union under President Johnson,[1] and even printed articles from former abolitionists.

DeBow's Review is known for several famous historical figures - both esteemed and controversial - who published material in the magazine: