The Vectren Dayton Air Show is an annual event at the Dayton International Airport in Vandalia, Ohio, eight miles north of Dayton, Ohio. The history of flight exhibitions dating back to 1910 by the Wright Company. [1] The city is the home of the Wright Brothers and the true birthplace of aviation, as Orville and Wilbur built the first powered plane in Dayton. [2] The show's main sponsor is Vectren. The show is recognized as one of the country’s premier aviation events. The Air Show takes place on a weekend in mid-July each year and celebrates Dayton's aviation heritage.[3] It is estimated that the 2010 Dayton Air Show attracted nearly 80,000 people and had a $5 million impact on the Dayton region's local economy.[4]

The Dayton Air Show showcases some of the world's best known civilian and military pilots. One of which includes the Blue Angels[5] Other notable yearly performances include: the U.S. Air Force Thunderbirds, U.S. Army Golden Knights, Sean D. Tucker, Patty Wagstaff, and others.[6] Included with these are also various fly-overs by aircraft such as the F-18 Super Hornet, B-2 Spirit, B-52 Stratofortress, A-10 Thunderbolt, P-51 Mustang, C-5 Galaxy, and more.[7] Along with performances, there are also more than 100 ground aircraft on display.[8]

The following is a list of all aircraft that have performed in the Dayton Air Show in 2009 and 2010. Please note that only the acts are listed, not static displays or other ground attractions. 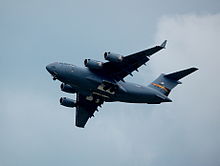 The US Air Trade and Technology Conference and Exposition (USATT) was initiated by Congressman Mike Turner to bring together contractors, subcontractors, governments, and others to discuss issues pertaining to the Aerospace industry.[11] The program focuses on UAVs, human performance, sensors, and alternative fuels, among other things.[12] Although the (USATT) takes place during the Dayton Air Show, it is not open to the public.

An accident during a stunt flight resulted in the death of Jim LeRoy, who was pronounced dead on July 28, 2007 in a military MEDEVAC helicopter while in transit to Miami Valley Hospital in Dayton, Ohio.[13][14] [15] The reason of this crash was reported as pilot error by the NTSB.[16]