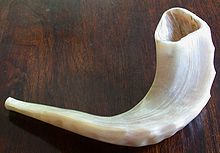 Ashkenazi-style shofar. The shofar is used during the High Holy Days.

The term High Holy Days most probably derives from the popular English phrase, “high days and holydays”. The Hebrew equivalent, "Yamim Noraim", is neither Biblical nor Talmudic. Professor Ismar Elbogen, author of “Jewish Liturgy in its Historical Development”, avers that it was a medieval usage, reflecting a change in the mood of Rosh Hashanah from a predominantly joyous celebration to a more subdued day that was a response to a period of persecution.[1]

Many prefer the term High Holy Days over High Holidays because the former emphasizes the personal, reflective, introspective aspects of this period. By contrast, Holidays suggests a time of communal celebrations of events in the history of the Jewish people.

The Hebrew month preceding Rosh Hashanah, Elul, is designated as a month of introspection and repentance. In preparation for the Jewish New Year, special prayers are recited. Psalm 27 is added at the end of morning and evening prayers, and the shofar (ram's horn) is blown at the end of morning services on weekdays (except for the eve of Rosh Hashanah itself). Among Sephardi Jews, Selichot are recited at dawn on weekdays throughout the month. Also, many complete the entire Book of Psalms twice during the month. It is customary to increase the giving of charity (Tzedakah) and to ask forgiveness from friends.

At midnight on the Saturday night before Rosh Hashanah, Ashkenazi Jews begin reciting selichot. On the following days, however, they generally recite the selichot before the regular morning prayers. On the eve of Rosh Hashanah, extra prayers are recited and many fast until noon.

Rosh Hashanah (ראש השנה rōsh hashānāh, beginning of the year) is the Jewish New Year, and falls on the first and second days of the Jewish month of Tishri (September/October). The Mishnah, the core work of the Jewish Oral Torah, sets this day aside as the new year for calculating calendar years and Sabbatical and jubilee years.

Rabbinic literature describes this day as a day of judgment. God is sometimes referred to as the "Ancient of Days." Some descriptions depict God as sitting upon a throne, while books containing the deeds of all humanity are opened before Him.

Prayer services are longer than on a regular Shabbat or other Jewish holidays, and include (on weekdays) the blowing of the shofar. On the afternoon of the first (or the second, if the first was Saturday) day, the ritual tashlikh is performed, in which sins are "cast" into open water, such as a river, sea, or lake.

The Ten Days of Repentance

The "ten days of repentance" include Rosh Hashanah, Yom Kippur and the days in between, during which time Jews should meditate on the subject of the holidays and ask for forgiveness from anyone they have wronged.[2] They include the Fast of Gedaliah, on the third day of Tishri, and Shabbat Shuvah,[3] which is the Shabbat between Rosh Hashanah and Yom Kippur.

Shabbat Shuvah[4] has a special Haftarah that begins Shuvah Yisroel, hence the name of the Shabbat. Traditionally the rabbi gives a long sermon on that day.[2][5]

It is held that, while judgment on each person is pronounced on Rosh Hashanah, it is not made absolute until Yom Kippur. The Ten Days are therefore an opportunity to mend one's ways in order to alter the judgment in one's favor.[2]

Yom Kippur (יום כפור yom kippūr, "Day of Atonement") is the Jewish festival of the Day of Atonement. The Hebrew Bible calls the day Yom Hakippurim (Hebrew, "Day of the Atonement/s").

In the Hebrew calendar, the ninth day of Tishri is known as Erev Yom Kippur (Yom Kippur eve). Yom Kippur itself begins around sunset on that day and continues into the next day until nightfall, and therefore lasts about 25 hours.[6]

Jews fast throughout Yom Kippur and attend synagogue for most of the day. There are five prayer services, one in the evening (sometimes known as "Kol Nidre" from one of the main prayers) and four consecutively on the day.[6]

Generally, throughout most of the year, Jewish worship services are open to all, regardless of affiliation, and membership or payment of any fee is not a requirement in order to attend. However, the high holidays are usually peak attendance days for synagogues and temples, often filling or over-filling synagogues.[7] Synagogues do not pass a collection plate during services as some churches do, as Jews are forbidden to touch money on the Sabbath or other holidays such as Rosh Hashanah and Yom Kippur. Rabbis and other temple representatives say the holiday ticket sales represent a not insignificant source of revenue.[8]

There is a Kabbalistic belief that, though judgment is made absolute on Yom Kippur, it is not registered until the seventh day of Sukkot, known as Hoshana Rabbah. The service for this day therefore contains some reminiscences of those for the High Holy Days, and it is treated as a last opportunity to repent of sins that may have been missed on Yom Kippur.