Wootton was educated at Bradford Grammar School, before going up to Jesus College, Cambridge to read Classics and then Law. While at Cambridge, he was also able to captain his college’s First Boat in 1972 when the crew swept the board against all comers – and he still tries to ensure he rows there once a year with his contemporaries.

In 1979 he became a Partner at Allen & Overy[2], the international law firm headquartered in London with offices in 24 other countries, specialising in corporate transactions and best-practice compliance with law and regulation in corporate governance. This involves dealing with mergers and acquisitions, IPOs and joint ventures across various international markets. Having a strong interest in the governance of the City of London, Wootton stood for election to Common Council and was elected as Member for the Ward of Farringdon Within in 2002. In 2005 he was elected Alderman for the Ward of Langbourn. He was Deputy Chairman of the Finance Committee and a member of the Policy and Resources and the City Lands and Bridge House Estates Committees. In 2009 he was elected Sheriff of the City of London. Wootton has been elected to be Lord Mayor of London in 2011/2012. 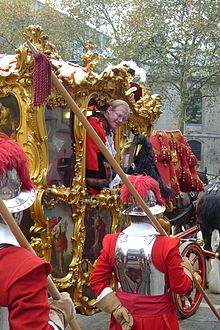 As Lord Mayor, waving at the crowds outside the Royal Courts of Justice, November 2011.

Wootton has made time throughout his career to devote to charitable and community activities in promotion of education and sport. Away from the City Corporation, he is a member of

A Committee member of the City of London Law Society, David is also Governor of several institutions, including:

He has been a member of:

Wootton is also currently Honorary Vice President and serves on the Council of the City Livery Club and is President of the Society of Young Freemen. He is also a member of Leander and the London Rowing Clubs, and the Athenaeum and the City of London Clubs.

Wootton is married to Elizabeth (Liz) and has two sons (James and Christopher), two daughters (Alexandra and Sophie) and three grandchildren (Ellie, Lucy and Casper). David and Liz live in Sevenoaks, Kent. His father was born in Smallthorne Stoke on Trent. He still enjoys going back and visiting some of his old haunts.