He was born in Tulsa, Oklahoma, graduated from Tulsa Central High School. He attended Westminster College in Fulton, Missouri, and graduated in 1972.

Spielman first became interested in photography at the age of 15, while still in high school.[1] While at Westminster College, Spielman covered the dedication of the Winston Churchill Memorial and Library, a Christopher Wren Church. It had been bombed during World War II and was being reconstructed on the Westminster campus in honor of Winston Churchill’s 1946 speech in which he coined the phrase iron curtain.[2]

Most of Spielman's senior year was spent in Europe studying art history in Vienna. He credits this experience with helping and guiding him in the composition and design of all his work.[1] 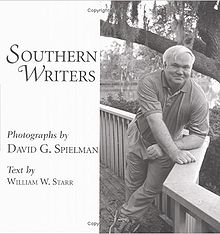 After graduation, Spielman moved to New Orleans to start his freelance career. Freelance projects in Ireland, Moscow, and Central America have given Spielman the opportunity to travel the world and shoot images of world leaders. His work is varied, and he uses funds received from corporate work to carry out personal and ongoing projects.[3]

Spielman's work has been featured in five books. His images have appeared in numerous magazines and newspapers, including The Times, New York Times, Los Angeles Times, Time Magazine, Newsweek, Forbes, and Architectural Digest.[4]

Southern Writers[5] has 72 portraits of Southern authors. Eudora Welty, Pat Conroy, and James Dickey are a few of the authors Spielman shot for the book. Most of the images were shot in the writer’s work spaces, a technique designed to provide a glimpse into the private lives of the authors and the creative processes of their work.[6] 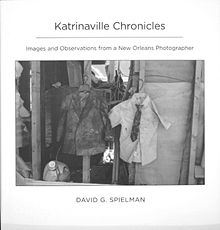 Katrinaville Chronicles[7] is Spielman's story of life during and after Hurricane Katrina. His photographs capture the devastation of different neighborhoods and the total destruction of New Orleans. The book features a first-person perspective of Katrina, including Spielman's personal e-mails that were dispatched during the aftermath of the storm. The Times Picayune said, "Spielman had to dodge checkpoints and authority while capturing Katrina’s devastation. A student of Walker Evans, Henri Cartier-Bresson and Robert Frank, he drew upon their experiences to stay under the radar."[8]

Spielman's photography is featured in Arnaud's Restaurant Cookbook[9] by Kit Wohl, as well as in Dickie Brennan's Palace Café Cookbook.

Spielman's work has been collected in the United States and throughout Europe and Asia. Spielman donated 34 of his pieces from his Southern Writers book project to The Ogden Museum of Southern Art in New Orleans.

Spielman lives in New Orleans; his gallery and darkroom are located in the Garden District in a century-old skating rink. He sells his personal work and the books that have been published. Spielman travels and lectures about his photographic experiences and books.